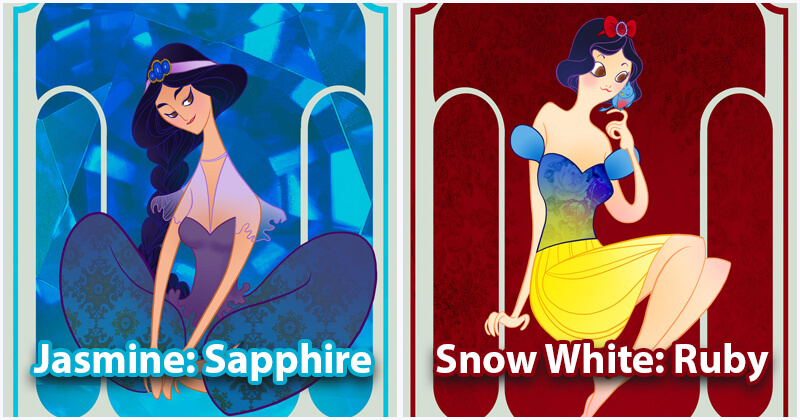 Although Disney movies haven’t revealed much about the dates of births of their leading roles, fans – especially astrology enthusiasts – can’t help but keep making a guest at which month these iconic characters were born based on their personalities. Recently, a famous illustrator named Kathryn Hudson has shared with her followers her opinion on this interesting topic, and the best thing is her answer comes with a series of mesmerizing paintings that will surely melt anyone’s heart.

Inspired by a poem about the 12 traditional birthstones written by an anonymous writer for Tiffany Co. in the 1870s, Hudson (who is also known by her nickname spicysteweddemon on social media) has created some really captivating artworks of 12 Disney princesses with the gemstones that perfectly match them. Graduated from The Savannah College of Art and Design in Savannah, Georgia, this LA-based artist is currently a Character Lead for Warner Brothers Animation on the reboot of “DC Superhero Girls” so it’s actually no surprise that she has such an impressive style of art and a very creative mind. Just scroll down and you will understand what we’re talking about! “Pocahontas is a courageous girl loyal to her friends and beliefs, so I thought the garnet portrayed her well.” “It’s funny. I chose Meg because in the poem, amethyst frees you from passion, something the independent Meg might want (but no need!) Only after I picked her did I realize she wears purple. Perfect!” “This is one of the stones that are different in the poem from what is considered the modern gemstone (aquamarine) I thought this part of the poem fit Mulan perfectly. Brave and Wise. I tried to make her girly and a tomboy at the same time…” “Who else would be a diamond? Innocent, sweet, Cinderella represents the springtime of April perfectly.” “My birth month! Rapunzel is perfect for this springtime month. In the short before Beauty and the Beast 3d, Flynn (Eugene) and Rapunzel finally get married! So sweet.” “June is perfect for Ariel. Its modern birthstone is a pearl (from the ocean!) The traditional one is agate. She is a wealthy, healthy, happy princess. ( Also the line about coming to earth is prophetic)” “This part of the poem really fits Snow White. Free from love’s doubts and anxiety. She always struck me as kinda airheaded…” “Belle for August! My favorite Disney princess. This is another stone where the traditional is different than the modern one. Sardonyx is in the background and in the book. She is wearing green for peridot though. The poem fits because she saved the beast from living unloved and alone!” “This is definitely the craziest part of the poem. I ALMOST did Giselle from Enchanted, but decided Jasmine worked better. She already has a sapphire on her brow, and she does act crazy occasionally. (The market with the camel)” “For some reason Esmeralda makes me think of November. Maybe her skin tone reminds me of topaz. Also, the line about friends and lovers: Quasi and Pheobus.” “Yay done! Some of ya’ll guessed Tiana from the Princess and the Frog would be December, and you were right! The most successful and hardworking Disney Princess.”