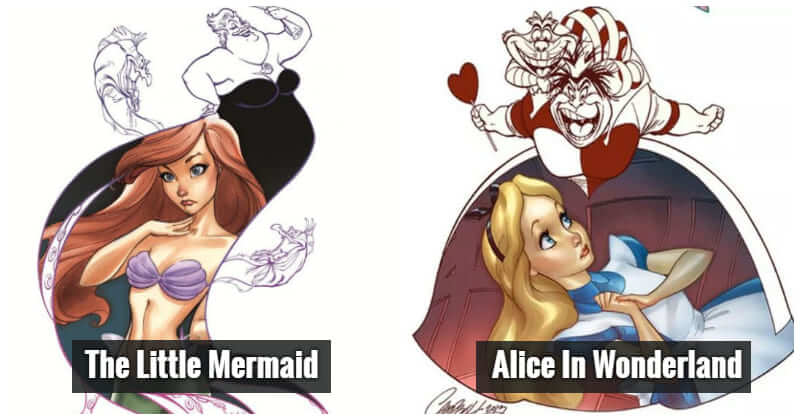 To develop an attraction for the movie, filmmakers always include the main character and the villain line. The same may be said of Disney animated films. Walt Disney Studio produces a good side and a bad side in most of its films, then pushes its main character to confront evil in order to define the character’s psychological development. It’s not hard to find stories about innocent princesses who are abused by villains (typically stepmothers, bad witches, etc.) and must fight to save the kingdom/save themselves (or just simply find their true love).

Because they are villains, audiences sometimes overlook their relevance, not realizing that the villains play a crucial role in the development of the main character. So, to honor the importance of villains and highlight the contrast between the good side and the bad side in Disney movies, brilliant artist J-Scott-Campbell combined the two sides in one illustration. Many Disney lovers from all around the world have embraced this series of his imaginative illustrations!

Check out these incredible drawings and let us know which one is your favorite!

#1 Snow White And The Seven Dwarfs This is the only illustration featuring two of the most beautiful women in the world: Snow White and The Evil Queen! I really like how the artist turned Maleficent’s hem into Aurora’s image! How stunning is this?

A fake mother and daughter pair! Tangled is one of those rare movies where we really see the connection between the bad side and the good side like this. Poor little Alice has to deal with The Red Queen, even I scared of her evil smile! The classic story of stepmother and daughter! Does anyone else like the beauty of Cinderella’s stepmother as much as I do? Hey, to be honest, after watching this movie, I was scared of octopuses! On one side is the innocent and kind Ariel, on the other is the evil witch, this illustration really emphasizes that contrast creatively!

If Animals Were Able To Think And Talk, Here Could Be The Topics In Their Conversations

The Art Of Origami: How Romanian Artist Folds The Paper Into “Talking” Cranes