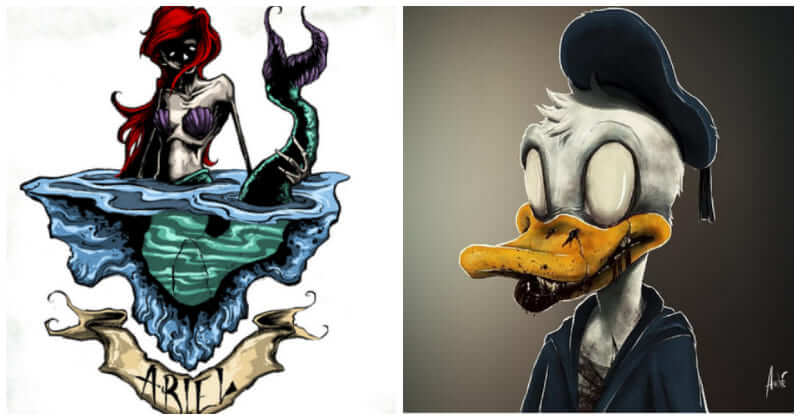 Up to now, those beautiful images in Disney movies have been deeply implanted in our minds such as beautiful princesses, handsome princes, or adorable animated characters.

As for creative artists, their artistic minds have different perspectives of anything, so they viewed those colorful images in Disney movies from the distinctive side. So, they prefer re-drawing those Disney scenes and characters in their own style and personal touch. Some works tend to be eerie and creepy which look completely artistic and outstanding, but they might make you scared. Despite the horrible appearance, their drawings have become widespread on social networks, I’m sure that you cannot take your eyes off them.

So now prepare yourself mentally to be able to admire these works of art!

#1 Micky Mouse by Will Hughes Mickey Mouse usually appears as a little cute boy in our mind. Hence, I am actually astonished by this macabre work of the 3D artist.

Rob Carlos re-draws beautiful Disney princesses in the appearance of zombies. I admit that he did a good job with those works! Princess Ariel and Cinderella make us scared of their creepy appearance. Did you remember a cute blue koala, Stitch?

Now he is transformed to the dark side by Boris Kiselicki, in my opinion, his art is quite good. Those works of art are illustrated by a multi-media artist, Dino Tomic.

Firstly, he has created a creepy version of Frozen, this work made me so impressive Another version of a cowboy Woody and Buzz Lightyear is partly thrilling but still good. The characters in Aladdin appear in a unique way of style. The mind-blowing work of Austen Mengler can not be undeniable. As for me, a very creepy style of Sully and Mike got me thrilled.

#7 Winnie The Pooh by Simon Hartvig Winnie has lost his adorable side in this work. It looks eerie! Whiluna has designed the creepy Bambi and gained a lot of attention for this piece. Two talented artists have come together to create Twisted Princess Series. They transformed these Disney Princesses into their own style. Are you scared by Ariel and Rapunzel in these drawings?

#10 The Happiest Place on Earth by jflaxman Another version of Mickey Mouse, I am sure that work definitely makes you feel very frightened. With the bloody mouth, Donald Duck tends to be horrible in this version, however, it is still an amazing piece. The little cute boy in Pinocchio is illustrated by Simon Hartvig according to eerie style. The artist exhibits his artistic prowess and dark sense of humor through his beloved characters.

The art of Shawn Coss has featured gorgeous Disney princesses with a dark tone. How amazing Ariel is in this drawing! Shawn Coss has shown us a whole new Disney world!

#15 Hades by Will Hughes To me, Hades is just too fantastic. This picture is on another level of art. You might be familiar with Phineas and Ferb, they are playful boys. But have you seen this version of them yet? It is quite unique and a little bit creepy. This Disney piece is the perfect one, it is really awesome eerie art.