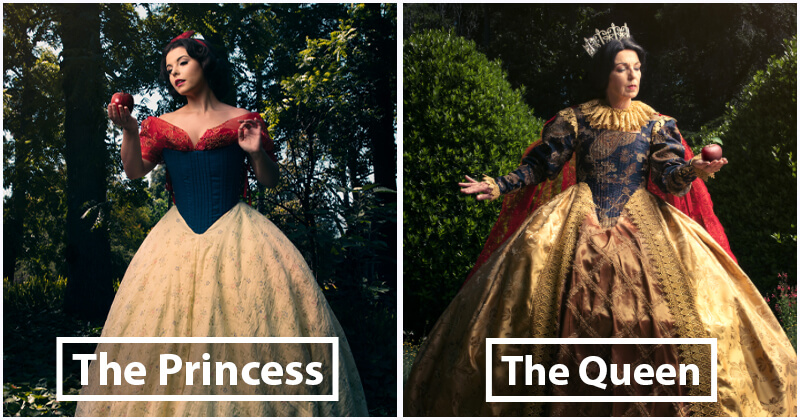 As a Disney fan, have you ever wondered what would your beloved Disney beauties look like when they grow old? If the answer is yes, you are so lucky!

To satisfy your imagination, photographer Tony Ross and his team have created a project in which models simulated beautiful Disney princesses, but the special thing here is that they also invited their own mothers to be part of the photoshoot as well. And the idea is, of course, to depict what princesses would look like when they become queens – based on similar features of the two generations.

So, why don’t you scroll down and check them out? I am sure that they are worth your click! The young Snow White is so gorgeous. She looks outstanding with her ebony black hair, red lips, and white skin. Many years later, Snow White is now a Queen. She looks so noble with the crown on her timeless black hair. Cinderella looks so lively and youthful. She is dancing happily and holding the glass shoe. Queen Cinderella looks so gentle in her blue gown. And her smile is still affectionate through time. The little mermaid Ariel is absolutely stunning. She is always a cheerful and jolly girl. Of course, Queen Ariel is a human now. She looks a lot more tranquil with the elegance in her eyes.

#4 Belle (Beauty and the Beast) The Belle Queen looks so lavish in this photo. Possessing a deluxe palace-like hers is the dream of many people. As she is young and brave, Mulan can risk anything to fulfill her passion. She decides to cut her long black hair to join the army instead of her father. After years later, Mulan is a gracious queen now. The Chinese Queen still loves martial art and practices every day.

#6 Elena (Elena and the Secret of Avalor) A youthful, passionate Elena can not put down the guitar. She loves singing along playing an instrument. Queen Elena looks so splendid in the red gown. Getting older, but she still loves music so much.

10+ Dogs Who Steal Their Owner’s Heart With Caring Actions

Little Girl Teaches Her Cats How To Draw A Flower