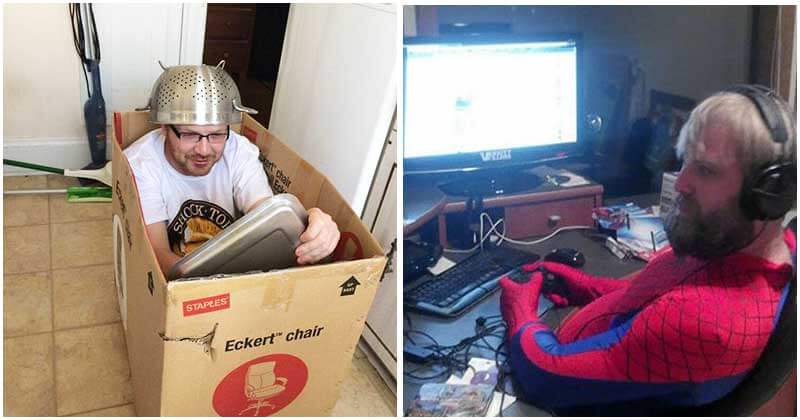 Being adults is uneasy when we have to carry a lot of obligations and responsibilities. Things are so tough at times, making us feel overwhelmed and wish we could go back to our childhood. And some people choose not to grow up in the first place, even though they’re physically mature people.

You might not believe it, but there is always a hidden little boy in every man, and we call them a man-child. Sounds about fun, right? So can you imagine what a man does whenever their inner child wakes up inside their body? Just scroll down the list below to see all the funny things proving that men never grow up. They just want to play and have fun, no matter how old they are. But we have to admit that having a guy that is young at heart is such an amusing thing.

#1. “My dad keeps placing this around to scare me” #2. When your boyfriend likes to cover your face with all sorts of things #4. Here is what if you marry a man-child #5. “Heard my husband telling the dog to stay still in the kitchen, and then…” #7. “My mom made the kids dinosaur tails for Christmas but they don’t fit around adult waists” #8. “When I made eye contact with him and smiled, he came up to me and whispered, ‘No one suspects the adult’.” #9. “Sister texted me saying she lost her husband at Babies R Us. 20 minutes later, she found him” #12. “My husband is no longer allowed to go to the craft store alone” #13. Spiderman is the witness for the wedding #14. He wants to swim with his turtle #16. It stormed during the eclipse so the man improvised #19. They brought him this after he knocked over his orange juice #20. He and his cat trying to catch bugs together #21. The man ordered this from Thailand 20 Fascinating Things That Will Totally And Completely Blow Your Mind

Exercise Your Brain With These Hilarious Pun Memes

“Things That Are Not Aesthetic”: A Polite Way Of Describing These Things

You May Wish For: 10 Easiest Jobs In The World That Pay Well And Offer Low Stress

20 Signs That Are Way Funnier Than Needed

These Hilarious Mannequins Can Bring You Peals Of Laughter

Funny 20 Gifts From Grandmother That Contain Love Within Them

10 Funniest Memes Of A Man Sleeping At Work – Photoshop Pictures

20 Hilarious Times Teachers Tweeted Their Feeling To Their Daily Job

20 Unfortunate People Who Will Never Consider Getting Inked Again