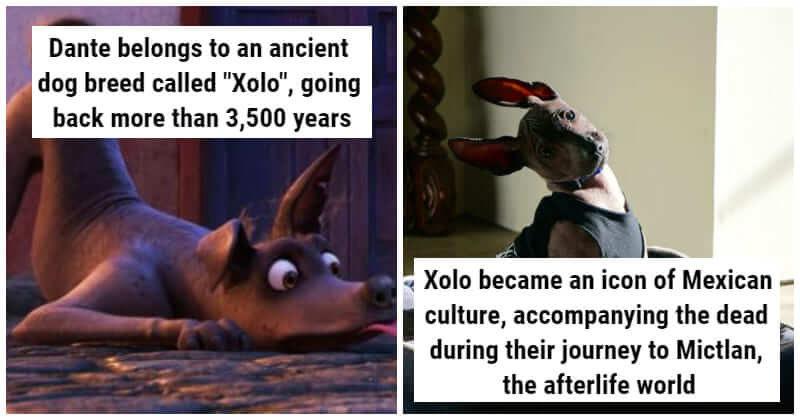 Coco is a Pixar’s extremely inspiring movie where Miguel, an aspiring young musician embarks on an adventurous but wonderful journey to the Land of the Death. And, the brave boy has a loyal and energetic friend accompany him along his way. Exactly, it is Dante the Xolo dog. The name Dante was inspired by an Italian poet. Though Dante was not the main character and sometimes appeared to be quite naughty that screwed up things, Miguel’s adventure would not be completed without him.

It was said that Dante was actually very true to real-life Xolos. Especially, according to Mexican mythology, in order to make the journey through the afterlife, you needed to have a Xolo dog as your companion. There are many more interesting facts about Dante that you may not have known. Let’s discover them! Dante belongs to a breed called “Xolo”, short for “Xoloitzcuintli”. Xoloitzcuintli is a combination of the name of the Aztec god of life and death – “Xolotl” and the Aztec word for dog – “Itzcuintli”. The breed’s existence goes back about 3,500 years, based on archaeological evidence found in the tombs of Aztec Indians.

#3 The national dog of Mexico Xolos was originated in Mexico and has become an icon of Mexican culture as well as a national symbol.

#4 Companions of the dead According to Aztec mythology, Xoloitzcuintlis accompanied the dead during their journey to Mictlan, the afterlife world. Moreover, dogs were buried next to the bodies of the deceased, so that they could set out on their spiritual journey together. The most noticeable feature of these dogs is the absence of fur. However, they are just nearly hairless, not completely as the American Kennel Club has accepted the version of the Xolo that has a little fur. Besides the hair, Xolos often have missing teeth, so their tongue naturally hangs out, a feature of Dante’s that is played for maximum laughs in Coco.

#6 They are very, very warm Due to their lack of fur, they feel warmer to the touch than other dogs. Because of that, a lot of people use them as therapy dogs, and historically, they were treated like heating pads for sick or hurt people. Because of that, a lot of people use them as therapy dogs and they were treated like heating pads for sick or hurt people. And historically, some people even believe that Xolo dogs have healing abilities. They come in different sizes which are toy Xolos, miniature Xolos, and standard Xolos. And it also comes in several colors. There are black, gray, and even reddish Xolos. They are all beautiful in their own ways. They were super trendy pets in Mexico in the ’30s and ’40s. At that time, many Mexican artists kept Xolos, like Frida Kahlo and Diego Rivera. However, their popularity has sadly decreased over time. Hopefully, the success of Coco will change the situation.