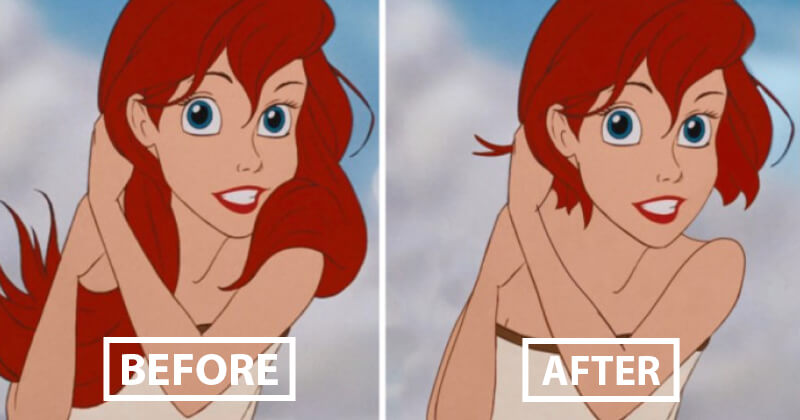 In general, we all have at least one hairstyle that makes us look good and it always expresses some notable features of our nature. Disney princesses are just the same. Obviously, Disney princesses match well with the current hairstyles. Their beautiful original haircuts and colors perfectly fit them and help people recognize these beauties easily.

However, what would they look like if they had shorter hair? Are they still beautiful and charming? Are there any differences when they change their hairdo a bit?

Well, to help you with that, The Disney Studios have some illustrations to show you. So, let’s dive right into them! Cinderella and short hair are quite a match. But the total look will be better without the bow tie.

#3 Belle (Beauty and the Beast) Belle is graceful with this short brown hair. She looks like a noble lady, really. Jasmine is beautiful and charismatic in both hairstyles. She is gorgeous with long hair and lively with the shorter ones. Ariel matches well with the short red hair. As she is sweet and jolly, this hairstyle is for her.

#6 Esmeralda (The Hunchback of Notre-Dame) Esmeralda is still gorgeous in all. I mean, she is so charming and attractive that she can suit any hairstyle. Oops, I am sorry, Mulan, but I think you should let your hair grow. Honestly, I love your original hair. Pocahontas looks very stylish with this short black hair. I think you should consider taking part in The Face 2022, really. Another sufferer of unsuitable hairstyle is Kida. Your long hair makes you look young as your age. Rapunzel looks not too bad in her new hair. Honestly, it cannot make her looks as beautiful as usual, but it’s okay. Alice fits quite well with a short haircut. I mean, as she is curious, this hairstyle, which makes her look more lively and mischievous, totally suits her. Honestly, Moana is like ten years younger with that new hair. So, if you want to go for some drinks, you should go back to your old ones. Another member of the Shorthair team, Jane! She looks good on short hair, even more than the long ones. After considering the two pictures carefully, I vote for the long hair. I love Megara’s charming look with it. Elsa and Anna look lovely in the new hairdo. Elsa is more elegant and mature, and Anna is cuter. Merida must have felt upset when she cut her hair. Look at her old one! It is a beautiful long red ruffled hair! Giselle looks like a stylish girl, really. Frankly, not everyone can fit such short hair well like her.

14 Hilarious Moments That Describes Perfectly The Differences Of Two Genders