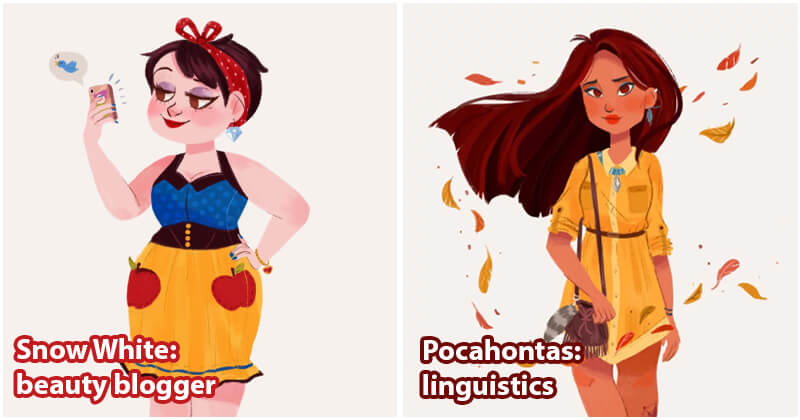 Beautiful Disney Princesses with their unrealistic fairy world have enchanted millions and millions of people. But if they were modern people (Millennials), how would their lives be? To answer that, Anoosha Syed, a Canadian artist, showed the world her fan arts inspired by the hashtag #moderndisney. By bringing Disney princesses into this era, she recently has made a wave of excitement in the Disney fan community.

We collected 11 creations of Syed below for you to enjoy. We are sure there is an intimacy to see Disney princesses dress like us and have a job. So, let’s scroll down and check them out!

#1 Ariel (The Little Mermaid) as a professional basketball player When she was a little girl, Ariel wanted to become an oceanographer to please her father. But after secondary school, she knew she had to change majors: a professional basketball player. Her sisters think she has a crush on Eric, a handsome coach, but that’s not true as Ariel loves being in astir.

#2 Jane (Tarzan) as a biologist After receiving a Bachelor’s degree in science book illustration, Jane’s father offered her a great opportunity: joining him in studying African chimpanzees in the Congo rainforest. Jane is so excited despite dangerous beasts lurking in the forest.

#3 Pocahontas (Pocahontas) as a a linguistics As she loves languages and cultural heritages, Pocahontas works as a part-time translator while attending a Linguistics and Literature university. Besides studying, she often climbs mountains and kayaks in rivers.

#4 Belle (Beauty and the Beast) as a writer As a writer, Belle loves reading and watching TV shows. In her leisure time, she often stays up late reading comics or watching Game of Thrones. Look at her eyeglasses, and you can see why! Snow White, commonly known by her nick @apple_poison7, is a fashionista and beauty blogger. She has two million followers on Twitter and often posts pictures about her outfits, makeup styles, and skincare routine. Being on her iPhone most of the days, Snow White takes lots of selfies with many celebrities.

#6 Jasmine (Aladdin) as a diplomat officer and charity activist Jasmine is a diplomat officer who loves exploring the world and experiencing different cultures. She also enjoys studying veterinary medicine and is a charity activist. Jasmin often donates old clothes and gives them to the poor.

#7 Esméralda (The Hunchback of Notre Dame) as a leading ballet Esméralda is a ballet dancer of a famous theater in Paris. Also, she is a leader in immigrant protests, a volunteer of refugee camps, and passionately contributes to justice. As Esméralda is merciful, she adopts three kittens and five puppies.

#8 Merida (Brave) as a rock singer Usually, Merida learns to ride horses and use archery with her brothers. As lively as her look, Punk Rock is her favorite music genre. Merida often performs at Brave coffee house at night. Mulan always wants to attend the military school her father attended in his youth. As she is hard-studying, Mulan proves herself to be an excellent student. No need to say that how much her father is proud of his daughter.

#10 Tiana (The Princess and the Frog) as a businesswoman Owning seven billion dollars, Tiana is one of the “25 most successful people before 25”. With the Tiana’s Palace chain containing 120 restaurants, she is one of the youngest entrepreneurs.

#11 Rapunzel (Tangled) as a magazine model Rapunzel, one of the favorite magazine models in America, suits many styles: from long blonde hair to a short dark one. This photo is one of her pictures in the next coming Vogue.

These Cakes Look Almost Identical To Natural Wonders, Deceiving 90% Of Viewers Because Of Its Sophistication

Girls, Don’t Care And Be Hurt By Idiots Who Set Beauty Standards For You