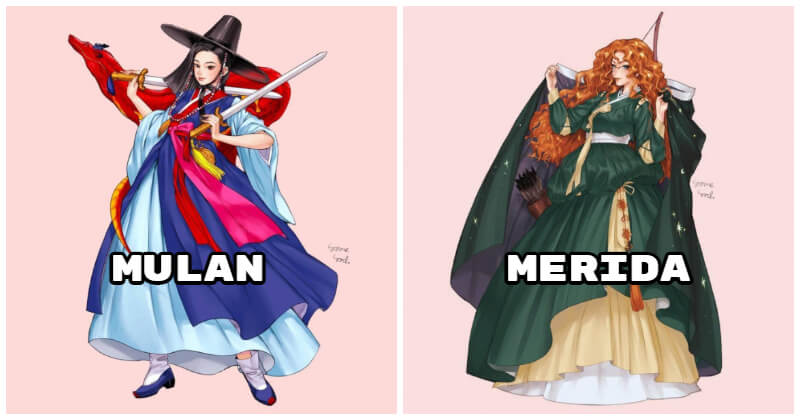 Each country’s painters have their own specific types, such as the charming collection of Disney princesses dressed in Hanbok made by a South Korean artist we would love to introduce to you in this post. Somesad was smitten by the stunning Korean clothes she saw on screen, so the illustrator tried to reimage our familiar Disney princesses with fancy Korean makeovers. She’s always been a fan of fairy tales and Disney animation, so this was a perfect fit. Her draw is truly amazing and lovely.

It’s worth noting that this Korean artist combined traditional Korean clothes with a contemporary style. From simple Hanboks to ornate ceremonial Hanboks, everything is available her. Let’s check out this artistic collection! Princess Cinderella, dressed in Hanbok, has a similar hairdo to that of “Cinderella.” We can also observe that when Cinderella puts on her Hanbok, she also remembers to put on her crystal shoes.

#2 Cruella (One Hundred and One Dalmatians) She looks noble when paired with a hanbok with a thick fur coat. Mulan’s Hanbok appearance is still extremely valiant. The Mushu dragon in the rear is very striking, and Mulan’s short hair adds to her appeal. A lovely and beautiful look of Sofia in this purple Hanbok.

#5 Tiana (The Princess and the Frog) The photo of Princess Tiana above is a wonderful example of how a black girl wears a hanbok. Her face features, on the other hand, look more like Asian girls, and she lacks Princess Tiana’s original traits. The wonderful outfit gives a gentle look to the sleeping Aurora.

#7 Beast and Belle (Beauty and the Beast) Although the Beast Prince’s true look is quite attractive, many admirers believe that the beast-like aspect is the most stunning. The Beast Prince in the image below appears to be a peaceful young lion. Fans were envious and envious of the Prince of the Beast and Princess Belle’s lovely connection. Rapunzel’s facial characteristics change slightly from those in the animated version. They aren’t as “dynamic,” but her long hair still draws everyone’s attention. The floor’s long golden hair is still there. There are flowers adorning it too, and they are undoubtedly stunning! An unusual Hanbok without jeogori (short jacket) for our Native Princess! The most striking feature of Ariel the Little Mermaid is her brilliant red hair. Furthermore, Ariel’s Hanbok is distinct from the traditional Hanboks and appears to be cooler. After viewing so many princesses’ Hanbok looks, Princess Ann and Elsa’s overall style should be the most classic, right? Snow White looks so fascinating, but that little bird is no less adorable! Daring, fierce, enchanting. What a girl!