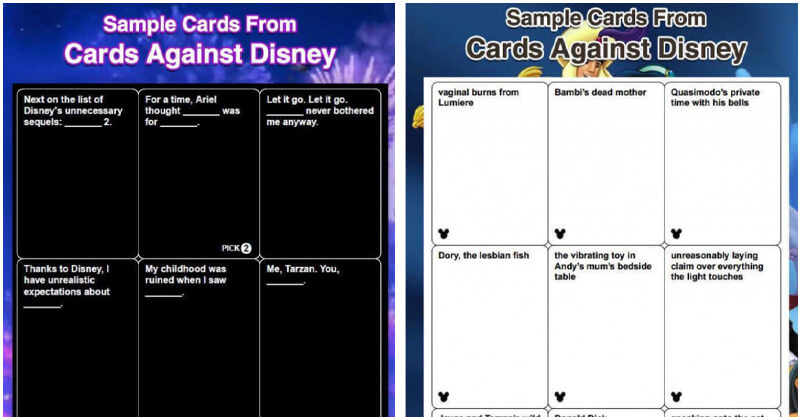 Disney films, which include some of our greatest animated characters and tales of all time, have played an important role in many of our early childhoods. If you enjoy the party game with Cards Against Humanity, you’ll adore Cards Against Disney, which will completely change your childhood.

The game includes 260 black cards and 568 white cards with extremely humorous (and very NSFW) Disney-themed prompts that poke fun at all about your favorite Disney characters, movies, and songs. From “Booty and the Beast” to “Making Pinocchio lie while he’s eating you out”, this is the game for you if you have a sarcastic attitude toward your childhood memories. The game is only accessible in digital format for now, so you’ll have to print the cards yourself.

For all adult Disney lovers with a dark sense of humour, this game is a must-have. It’s sure to make you chuckle for hours! If you’re a fan, you won’t want to miss out on purchasing this game!

Here are a few examples of the cards you’ll get as part of the game. While most Disney-related goods focus on the lovely cartoon characters, Cards Against Disney is the polar opposite, including cards that will make any Disney fan blush! There are 260 black question cards and 568 white answer cards in this set. Isn’t it a fun game to play? People Share Funny Names That They Use To Save Their Contacts