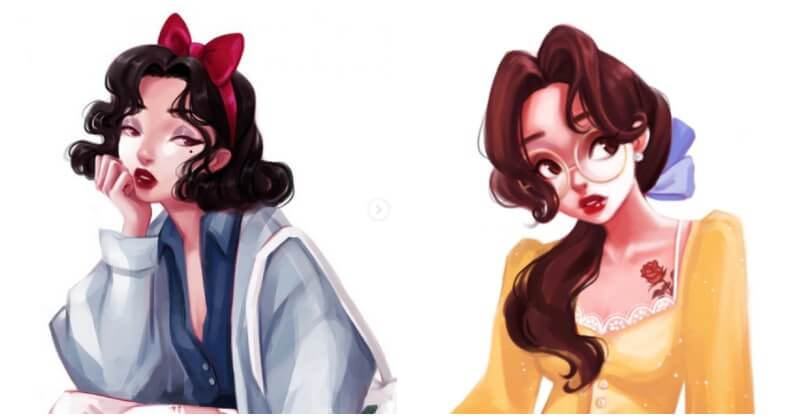 What is the first image that pops into your mind when you think of Disney princesses? Is it pretty girls with excellent makeup? Is it beautiful girls in gorgeous prom dresses? Those sparkling images have almost become unbreakable standards for these Disney beauties.

A talented Chinese artist named felicexu, with her great creativity and a huge love for classic Disney animated movies, always cherishes the idea of breaking this standard and making the princesses more integrate with the modern world. Therefore, she has spent a lot of time drawing and publishes a series of Disney princesses’ everyday costumes. Dressed in modern and casual outfits, the princesses not only do not lose their beauty but also be more youthful and dynamic. These fanarts give us a new and more interesting look of the image of Disney princesses. This series of felicexu has received positive responses from fans and they even wish the artist could sell these outfits.

Let’s take a look at this article below and explore this new Disney princess’ look!

#1 Kida from “Atlantis: The Lost Empire” This version of Kida even makes her look more energetic. Does this grown-up Vanellope impress you a lot?

#3 Snow White from “Snow White and the Seven Dwarfs” “Mirror, mirror on the wall, who is the fairest one of all?” Her dress is so sparkling that it makes everyone dumbfounded. The artist said that Anna is the sweetest cutie of all in her heart.

#6 Belle from “Beauty and the Beast” Who cannot fall in love with such a wise girl like Belle?

#7 Tiana from “Princess and the Frog” One Disney fan has realized that “Princess and the Frog” was the 9th Disney movie so felice.xu has put her hairclips to create the roman numeral 9. She’s so meticulous, isn’t she? Have you ever seen such a soft Pocahontas like this? Be kind, have courage and always believe in little magic! One interesting fact you should know: Mulan is felice.xu’s favorite princess. Moana is redrawn with dynamic image to match her hobby of traveling around.

#12 Ariel from “The Little Mermaid” Ariel fanart is actually her first artwork of her series of Disney princess in casual outfits. Her outfit is so modern and can capture all the attention. Whatever costume Jasmine puts on, she is truly a queen!