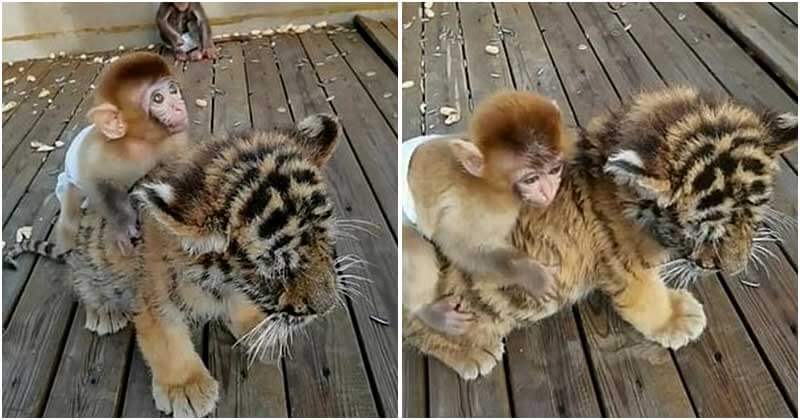 Like children, baby animals love making friends. They can befriend a friend that they just meet for the first time. They don’t find their friends different, so they keep coming to each other. The bond blossoms naturally and strengthens day by day. They love spending time together and get tons of fun and smiles with it. This is what a true friendship is supposed to be, right? Today’s story is about the adorable and heart-warming relationship between a baby monkey and a tiger cub. The pair have a joyful time every time they are placed together in an enclosure.

Ban Jin the four-month-old macaque and September the three-month-old cub were living at the Hengshui Wildlife Park in northern China’s Hebei Province. The two had a special bond with each other as they were born around the same time and growing up together. When their caretaker let them play together in an enclosure, they couldn’t be happier. Ban Jin proved to be a naughty boy while December was friendly and tolerant to his friend. The baby monkey in the diaper loved riding on his tiger friend’s back. The little animal really enjoyed his journey. He could go around without walking. Perfect!

These adorable moments were captured on the camera by the zoo’s staff. When they shared it on the zoo’s Douyin, it went viral in an instant. People all fall in love with two odd friends. They had the purest and most beautiful relationship ever! Regarding December the tiger cub, he didn’t get annoyed or irritated with his friend’s act. He was always ready to give his friend a ride when he needed it. They were friends.

Before Ban Jin enjoyed piggyback on his friend, he was afraid of the big cat. His friend was much bigger than him, right? But the pair quickly get along with each other and became best friends. If you are looking for something adorable of baby wild animals, this story will work.

Woman Paid A Stranger’s $600 Vet Bill, Got Criticized By BF For Her Random Act Of Kindness

20 Cute Animals Who Thought They Were Spies And Secret Agents