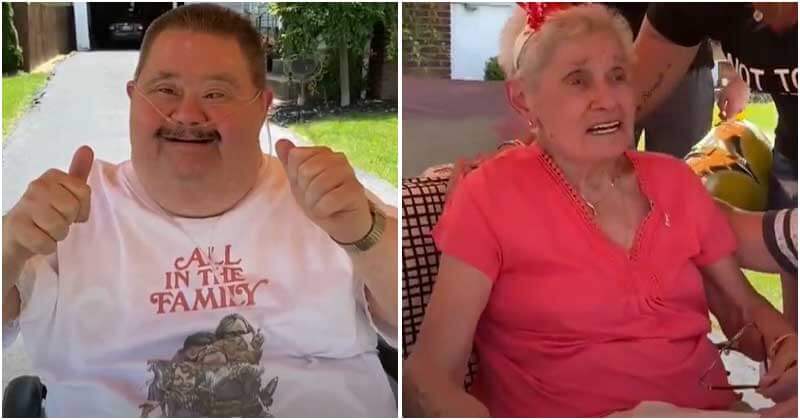 Seeing children grow up healthily day by day is probably the happiest thing for mothers. Poorly, some kids face health problems from an early age, forcing them to struggle for their survival. It’s heartbreaking to hear that your babies won’t live long. It’s certainly a very long, tough journey but no mom can give up on their children. They will do everything to keep their children stay alive.

This is also the case of the woman named Barbara Jean Wittkugle, aka Bobbi. Her 63-year-old son, Joey Wittkugle, was born with Down Syndrome. At that time, doctors told her that he wouldn’t live past 11. You can never imagine how heart-wrenching it was when she heard the announcement.

However, the miracle comes. Wittkugle celebrates his 62nd birthday last year. His mom has given him tremendous love and care that help save his life. Their neighbors and community all admire the dedicated mother and the son.

Joey was born on June 29, 1958. At that time, people only knew little about down syndrome. It is a condition in which a person has an extra chromosome, causing developmental delays. A child with DS will have a flattened face, almond-shaped slanted eyes, short neck, and small ears. The syndrome changes their appearance.

That is not all, this condition affects their health. They will face hearing loss, obstructive sleep apnea, ear infections, eye diseases, and heart defect. That is why doctors told Joey’s mother that he couldn’t live by the age of 11 and suggested she give him away.

Mother’s love is powerful. Bobbi never thought that she would let her son, Joey alone. Nothing changes her love for him. Her son might be imperfect but he was the most precious gift that God gave her. As it is precious, she will do everything to protect it.

The mother and the son with down syndrome have been together for more than half of the century. Wittkugle turns 63 this year. Last birthday is a special day in his life as around a hundred vehicles paraded in front of his front yard in Struthers, Ohio.

Family and friends nearby, a police cruiser, and even random people joined the parade. They wanted the Wittkugle to know that they are loved and cared for.

And Joey burst into tears with happiness and gratitude. God is fair. He was born imperfect but he has always got love and kindness from his family and community.

Bobby was truly a great mother. When people were still not all clear about down syndrome, she believed that her son would live longer than doctors said. And her sacrifice is worth it.

The mother also has a message for everyone on how to deal with children like Joey, who has Down Syndrome:

“What I want people to try to understand is when you see one of our children, don’t turn your back; don’t stare at them like they did years ago. They are human. They are special children from God. And please learn to love them as much as they love you.”

What Will Happen When You Meet People With The Same Sign? Watch Them Now!

15 Hilarious Times Of Sagittarius With Their Home And Family

15 Hilarious Moments That Only Sagittarius Women Have…Explore It!

A Series Of Hilarious Stories Between Geminis And Their Parents…Don’t Miss It!

Maybe You Don’t Know: Aquarius – A Person With Multiple Personalities