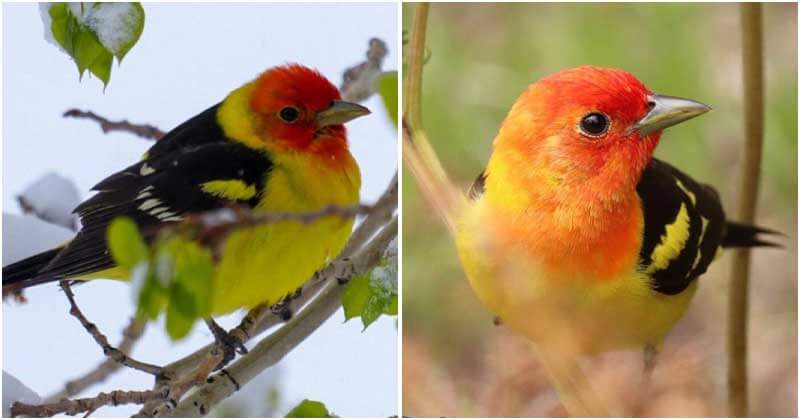 Yellow, orange, red and black are conspicuous colors. They can blend harmoniously and also create striking contrasts. What will happen if these hues appear on a bird’s plumage? That creature will shine brightly in their colony. They look like gorgeous flying balls. Not only do lifelong birdwatchers fall for these birds but we, normal people, can’t also keep our eyes off them.

The western tanager is one of these captivating birds. They are widely known for their bright yellow belly, brilliant orange-red head, and jet-black wings and tail. Perfect contrast between the upper parts and lower parts!

You can watch the video of this stunning bird below!

Comparing with the male, the female of this species is much duller with a yellowish head, olive back, dark wings, and tail. Both have black eyes and legs.

Western tanagers are a medium-sized American songbird formerly in the tanager family. They distribute along the western coast of North America from southeastern Alaska south to northern Baja California, Mexico, and extend east to western Texas and north through central New Mexico and some other regions.

Their breeding habitat is coniferous or mixed woods across western North America from the Mexico-U.S. border as far north as southern Alaska.

Thanks to the very large range, the population of these intense-looking birds is stable.

They prefer living in or near open conifers or mixed forests where they feed mainly on insects, including wasps, bees, ants, beets, grasshoppers, termites, and cicadas. However, these tanagers also eat berries and fruit, like mulberries and elderberries.

When the breeding season begins, the female of this bird builds her nest without the help of her mate. This nest is placed in a fork or a horizontal branch of a coniferous tree, such as pine or fir. It is at an altitude of 15-65 feet and is made from twigs, grass, rootlets, animal hair, and fine rootlets.

She then lays 3-5 eggs in her nest and incubates them on her own for 13 days. Once the eggs hatch, she continues to feed the chicks until fully-fledged, about 13 days. Noticeably, the male joins the female in raising the hatchlings.

Paralyzed Kitten Who Stays Little Forever, Loves To Be The Center Of Attention

An Elephant Herd, Big And Small, Cheerfully Slide Down A Muddy Hill

Owner Asks If She Really Should Let Friends Borrow Her Puppy To Play Prank On Another Friend, But Redditors Say “NO”