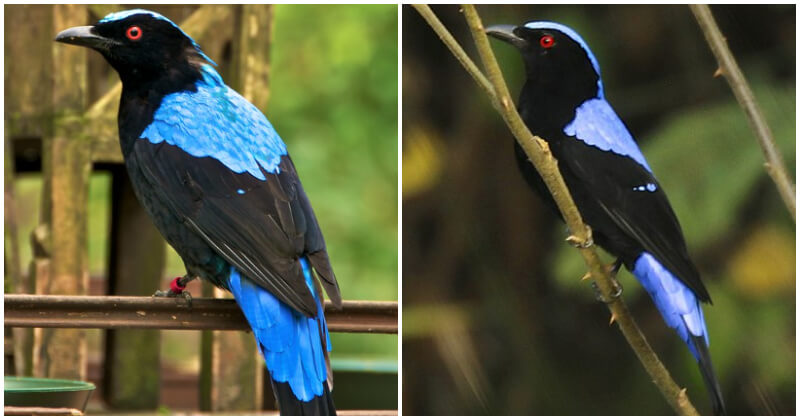 Glossy black and electric blue are eye-catching colors. What happens if these blend together and come in a bird’s plumage? This bird is very hard to miss in nature. It looks like a sapphire and shines whenever it appears, day and night. Sometimes, there is no need to be multi-colored to win the spotlight, two simple color shades can. The Asian fairy-bluebird is such a striking bird. As the name may suggest, this species has beautiful shining blue feathers on its plumage. You can see this color on its back, lesser wing coverts, and under tail coverts. The top of its head is even flecked with blue. Noticeably, other parts of this bird are covered with midnight black. It looks so gorgeous and some birdwatchers dub it knights of the dark. Let’s admire the stunning coat of this bird below!

Unlike the male, the female of this species is a more brownish blue on upper plumage, the lesser wing coverts, and lower tail coverts. Not just that, the sides of her head and whole lower plumage blue is a turquoise color.

Regarding young birds, they look similar to the female. This Asian bluebird is a medium-sized, arboreal passerine bird. It distributes in Sri Lanka and the western coast of India, and the lower ranges of the Himalayas. It is also found in some regions of southeast Asia, including Indochina, Sumatra, Borneo, Java, Palawan, and smaller nearby islands. The population of this species has decreased over the past years due to habitat loss and hunting.

These stunning creatures prefer living in the evergreen forests of the hills and plains, and various types of humid and deciduous forests from the lowlands up to about 1,600 meters (5,200 ft). But you can also see them in gardens and plantations. They feed mainly on various fruits, flower nectar, and sometimes insects caught on the wing. During the breeding season (from February to April), the female of this species builds her nest in a small tree. It’s is made of small twigs and in the shape of a cup. She then lays two eggs in her nest, incubates them, and feeds the hatchlings until they are fully-fledged. If you love this handsome bird, just share this article with your family and friends!

20 Unique Animals Who Surprised Us With Their Stunning Looks

Cats Are The Biggest Jerks, And These 20 Photos Are All The Proof You Need