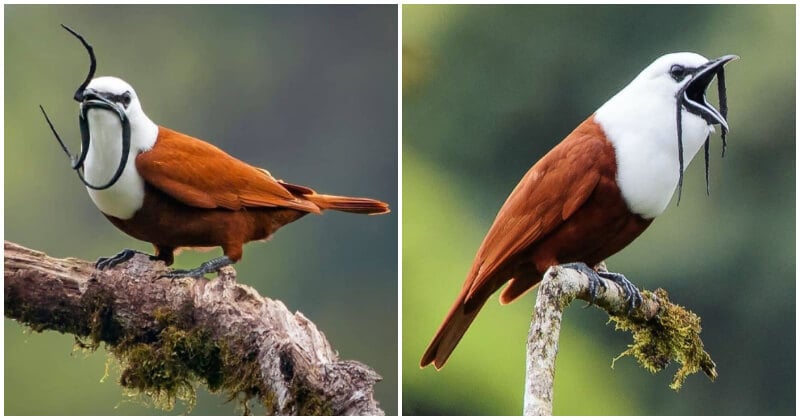 There are many unique birds in nature that make us think of aliens instead. They were born with one-of-their-kind features, making them conspicuous in the crowd. A huge beak, burning flame orange mohawk, eyebrows, multi-colored plumage, or mustache makes a name for these birds. They seem to jump out from fairy books that we used to be hooked into during childhood. The three-wattled bellbird is among these unmistakable birds. It has a stunning coat of bright white and reddish-brown. Their face, head, and neck are white while the other parts are covered in iridescent reddish-brown. Noticeably, this species has three wattles dangling from the beak. They look like a man’s mustache, right? Watch the video of these striking birds below!

Unlike male birds, the females are duller with an olive color and yellow streaks on the belly. They also lack 3 wattles of the males and have a larger beak, blackish-brown eyes, and grey feet. Three-wattled bellbirds are also known for their strange alien-like song. People have described it as a mix of bell-like chimes, interspersed with strange, and metallic clicks. For this strange song, this species is considered one of the loudest birds in the world. Currently, they are classed as vulnerable due to habitat loss.

This species only inhabits Central America from eastern Honduras to Western Panama. They breed in high elevations in Costa Rica. During the breeding season, male birds shake their wattles while singing to attract the females. When the season is over, these bellbirds fly off to lowland areas for winter. The main diets of these birds are large fruits, usually in the higher forest canopy.

20+ Animals Who Are So Cute When They Get Angry

OP’s Dogs Attacked Neighbor’s Cat, But OP Refused To Pay Vet Bills And Even Got Support From Reddit

10+ Cat Photos That Opened Our Hearts