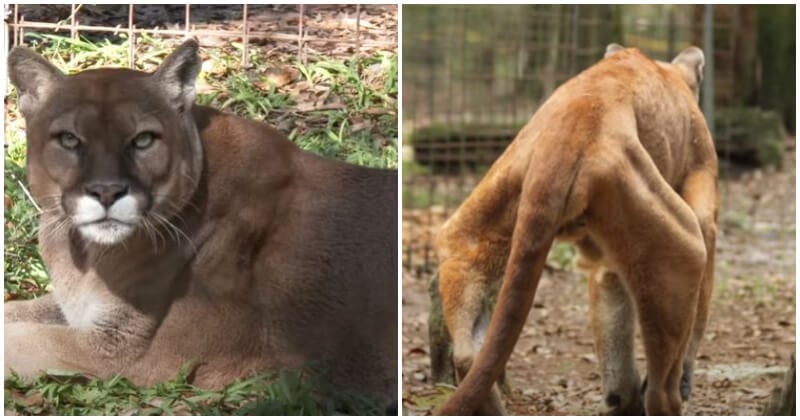 Wild animals deserve to live a normal life. In other words, they should live in the wild where they belong to. They may face threats and dangers (naturals or poachers) but they can live with their born nature. Majestic animals should live that way. Unfortunately, some people intentionally don’t understand this. They keep wild animals in cages, abusing them physically and mentally. They turn them into domestic animals to serve for shameful commercial purposes. This is the case of Mickey the cougar. The miserable wild cat was caged in a nightmarish backyard of a zoo in Alabama for years. This gradually deprives him off the thirst to live. Fortunately, the Big Cat Rescue spotted him and rescued him from that terrifying place. When the rescue staff came to rescue the cougar, they discovered that the zoo was operating without a license. Its USDA license was revoked in 2006. They later found out the woman running the zoo was feeding exotic cats like domestic dogs. That’s so cruel to wild animals!

The staff immediately sent Mickey to the Tampa-based rescue organization. The poor cougar suffered from severe pains, physically and mentally. He was emaciated with rotten teeth and debilitated legs. After medical check-ups, veterinarians believed that his legs were torn ACLs that made him barely stand up. That was not the worst, the specialists determined that the cougar’s knees were ravaged, with no ligaments or cartilage left at all. This broke the hearts of the staff when thinking of what Mickey had gone through. But rescuers didn’t give up on Mickey. They worked with doctors to tailor surgeries for Mickey. They all hoped to give the poor animals a second chance for life. The doctors used artificial ligaments to stabilize Mickey’s knee and helped him learn how to walk again with physical therapy. “He’s never going to walk perfectly but he’s doing incredibly well, and he’s able to get around on his own,” one of the doctors said. “We’re so happy to be able to give him a home for the rest of his life.” Meet Bone Bone, A Giant Kitty Fluffy From Thailand That Everyone Asks To Take A Picture With

10+ Animals Who Would Never Fail To Surprise Us

Girl Asks If She’s Wrong To Tell Her Friend Not To Name Cat After A Criminal, But Redditors Say She’s A Loser