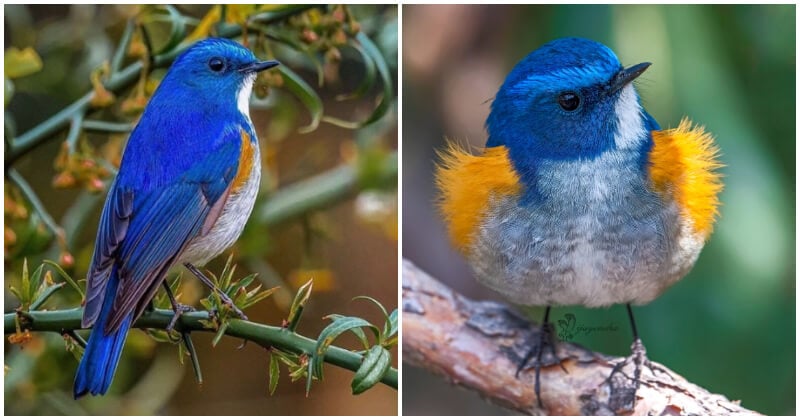 Blue sapphires are enchanting. They come in various hues, from pale baby blue to rich royal blue. What will happen if this stunning color covers all over a bird’s feathers? This bird will be a precious flying gem of nature, literally. With one-of-its-kind plumage, this bird can always stand out from a crowd. And we, humans, can never take our eyes off these creatures. The Himalayan Bluetail is among these striking birds. It puts on a beautiful blue sapphire coat with burning orange on the flanks. Its belly and throat, however, are an off-white color. This adorable tiny chubby bird also a short black bill. Let’s watch these stunning creatures below!

Like many other species, the female Himalayan Bluetail is duller than the male. She is covered with brown, along with a white throat, a pale blue rump, and tail. She still has orange flanks but they are paler than males. This bird also comes by the name Himalayan Red-flanked bush-robin or orange-flanked bush-robin. It is a member of the Muscicapidae family and distributes in the mountainous areas of many countries such as Pakistan, India, Burma, Nepal, Thailand, and China. Thanks to large habitats, the population of this species are now stable. They are considered to be of Least Concern on the ICUN list. In the Himalayas, this blue bird prefers living in coniferous forests, from 3,000-4,400 m in altitude, moving to lower altitudes during winter. They feed mainly on insects but sometimes eat berries and seeds if the food is scarce. During the breeding season, the female builds her nest near the ground. She then lays five eggs in the nest, incubates them, and feeds the hatchlings until fully fledged. The male doesn’t join the female at all. If you love this bird, just share it with your family and friends. Nature is amazing!

Tiny Lion Cub Runs To Dad For Comfort After Tumbling Out Of Tree, It’s So Sweet!

Guy Can’t Have A Cat, So He Cuddles And Takes A Pic With Every Cat He Meets