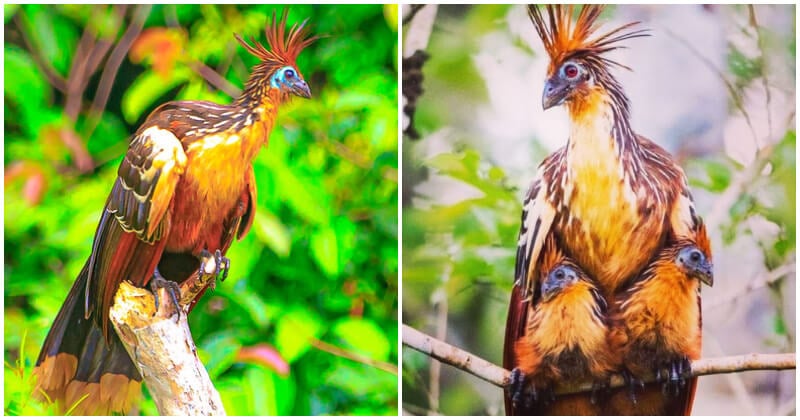 The world of birds is amazing! Many species were born with distinctive features, making them conspicuous wherever they are. One-of-its-kind plumage, huge crest, striking mohawk, or an enchanting long tail can make a name for these birds. I do believe that you can’t keep your eyes off them when spotting them in nature. This happens with the case of the hoatzin below. It has beautiful rufous-chestnut plumage, darker on the upperparts and much lighter on the underparts. This coat makes this species shine in the sunlight.

Additionally, these birds have a blue face and an orange mohawk. These remind us, humans, of an alien instead of a bird, right? This species is also known for its funky manure-like smell, highly funky aroma. This is caused by its unique digestive system. Hoatzins are large plump birds, about 25 inches in length. They come by several names, including reptile bird, skunk bird, stinkbird, or Canje pheasant.

You can watch its video below.

Young birds have no feathers when they were born. Their feathers grow down within a few weeks. This species is native to parts of South America, in the Amazon, and Orinoco basins mainly in Brazil, and bordering western and Northwestern countries on Brazil’s borders. Thanks to large distribution and habitat, the population of this bird is now stable, getting them out of the red list. They prefer living in swamps, freshwater marshes, gallery forests, and alongside rivers, lakes, and streams.

These plump birds feed mainly on leaves. They carry out a unique process called foregut fermentation. They have an enlarged crop in which they have their own symbiotic bacteria stored and use them to break down the cell walls of leaves. Hoatzins are also seen eating fruit and some flowers. The female hoatzin starts breeding when they are one year old. After finding mates, she will build her nest out of sticks in which lay 3 eggs. She then feeds the hatchings with the help of the male until they are fully fledged. If you find this brown bird striking and “cool”, just share this post with your family and friends