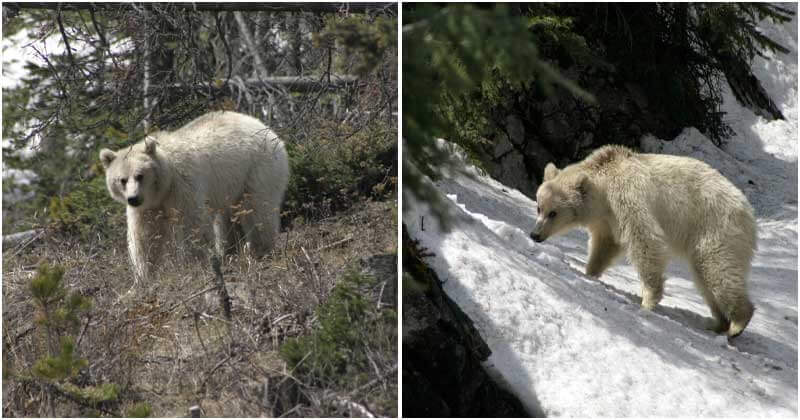 You may spot white bears somewhere on the Internet. But when it comes to a white grizzly bear, it’s very unusual. This species is typically brown, black, or blonde. If you accidentally see one in real life, it might be a once-in-a-lifetime opportunity. And, an extremely rare white grizzly bear was caught on camera in Banff National Park, Canada. A family visited the park at the weekend and spotted the weird animal accidentally. The family was astonished at first but they immediately took out their cameras and snapped some photos of the unique bear.

They later shared these images on the Internet and they went viral. Actually, the park’s officials have spotted the rare white bear since 2017. They had reasons to keep its existence secret. They didn’t want it to be at the center of attention. They were afraid that the bear would be disturbed by visitors. Rare animals also deserve a normal life in their own world.

“It’s not something that we necessarily wanted to draw attention to,” Jon Stuart-Smith, a wildlife specialist with Parks Canada told the media.

“But we were expecting that, at some point, it would start to draw attention. It’s an amazing thing to see such a unique (creature) but we hope people can realize that it highlights the
conservation concerns with the species as a whole,” he continued.

The bear is around 3 years old and is nicknamed Nakoda by locals. Its name means “friend” or “aly” in the indigenous language of Stoney Nakoda. Regarding its white coat, many people say that Nakoda is an albino. But it is not. The unique bear suffers from a typical recessive gene, making its fur and skin white.

Even though the park’s officials encouraged visitors to give the white grizzly bear space, many people have dropped by the park to see it. Some even approached closer to the animal to take photos and videos of it.

This is not recommended, guys. You should never encounter bears within 50 meters.