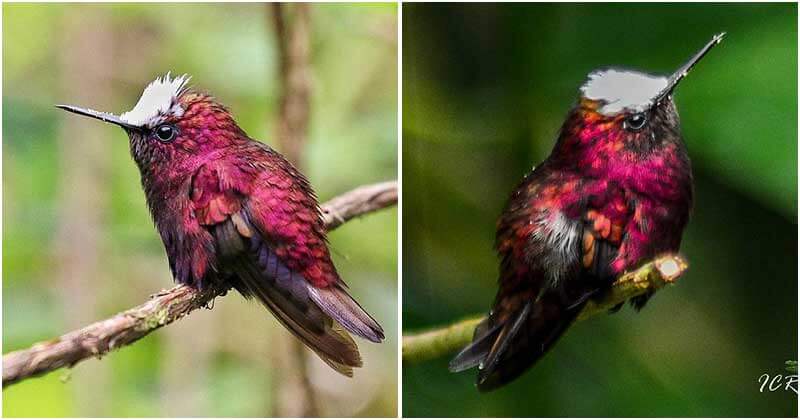 The hummingbird is a spectacular species. You can find many eye-searing birds of this family on social media. Some are so beautiful that people get doubted about whether they exist or not. The snowcap is one of these breathtaking birds. It doesn’t jump out from fairy books. It does appear in the wild. No bigger than a bumblebee but this tiny chubby bird can always stand out from the crowd. The reason is clear. It wears a one-of-its-kind red wine, deep purple coat, and a shining snow-white cap.

They are so cute to be true.

Watch the video of this striking bird below. They prefer living in the canopy, along the wet edges of the forest, and in the adjacent woodland. Their main diet is nectar from small flowers on vines, trees, and epiphytes. They hover and lick up the nectar 13 times per second. However, these birds also eat insects and spiders. The male and female of this hummingbird may mate with up to seven members of the opposite sex during the breeding season. After finding mates, female birds build their nests on a small twig or vine. This nest is made from plant fiber and cobwebs and is in the shape of a cup. The female then lays 2 eggs in their nests, incubates them for about 2 weeks, and feeds the chicks until fully fledged. Can’t keep your eyes off this stunning tiny hummingbird? Let’s share the article with your family and friend.

Girl Asks If She’s Wrong To Tell Her Friend Not To Name Cat After A Criminal, But Redditors Say She’s A Loser

20+ Hilarious Photos Of Animals That Will Make Your Day