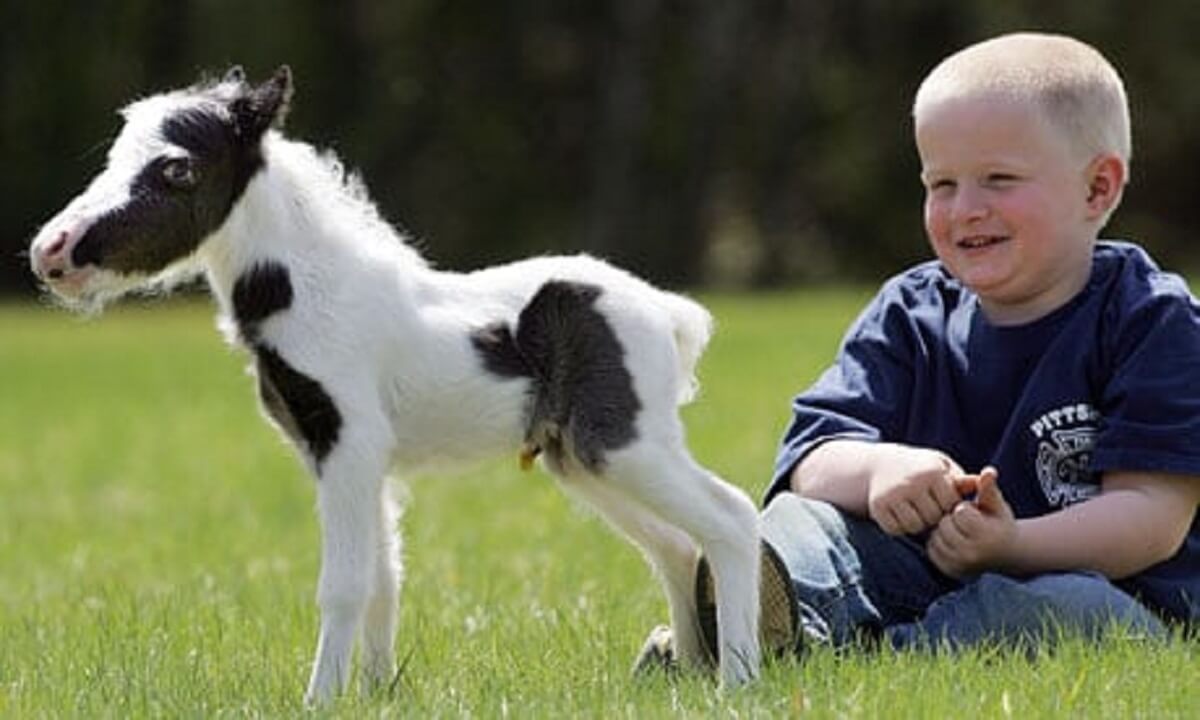 Einstein’s been hailed as the world’s smallest horse, but can he really lay claim to that title – yay or … neigh?

So there you were, pretty confident that the best equine story you were going to read all week was the one about the artist who turns My Little Ponies into slightly sinister film characters. Recalibrate your expectations, people. You’re about to meet Einstein, the world’s smallest horse.

When he was born in New Hampshire on Friday, young Einstein weighed just 6lb (2.7kg) and stood a mere 14-inches (35.5cm) tall. It is traditional to patronise small things by describing them as being pint-sized. Having spent some time cooing over this video of Einstein gambolling around his paddock to a rather charming bluegrass soundtrack, I have concluded he is at least two-litre-sized.

Einstein, a three-day-old pinto stallion which could lay claim to the world record for lightweight foal, with owner Rachel Wagner. Photograph: Jim Cole/AP

But no matter. His breeders on the Tiz A Miniature horse farm in Barnstead, New Hampshire, in the north-east US, are confident that he is small enough to enter the Guinness Book of World Records.

Now, I know what you’re thinking. Isn’t Thumbelina officially the world’s smallest horse? You read it in the Daily Mail. So did I. Plus her very own website makes the same bold claim. The 17.5-inch (44.5cm) mare has been milking it pretty much ever since Guinness bestowed on her the honour in 2006. She has even done a US tour.

But Thumbelina weighed a comparatively hefty 8.5lb when she was born in 2000. And she is officially a dwarf and not merely a tiny version of a proper healthy horse like Einstein, says Rachel Wagner, Einstein’s co-owner.

“Most of the ones that are really tiny are what we call dwarves and have some sort of dysmorphic features. This little guy is like all horses — he’s almost all leg,” said Wagner, adding, “He is very perfect looking little boy and not dwarfy looking at all.”

Not dwarfy looking at all indeed. Very cute too. But not cute enough to make it higher than number three on my list of all time favourite newsworthy horses. It will take quite some pony to trump Mayflower, who had such short legs that people kept on calling 999 because they felt certain she was stuck in the mud, or Fat Boy, who had to be rescued from a swimming pool in the West Country after getting drunk gorging himself on fermented apples.

Black Cat Adoption: 17 Reasons Why You Should Bring One Home

20+ Dogs Who Can Cat Better Than Cats Themselves