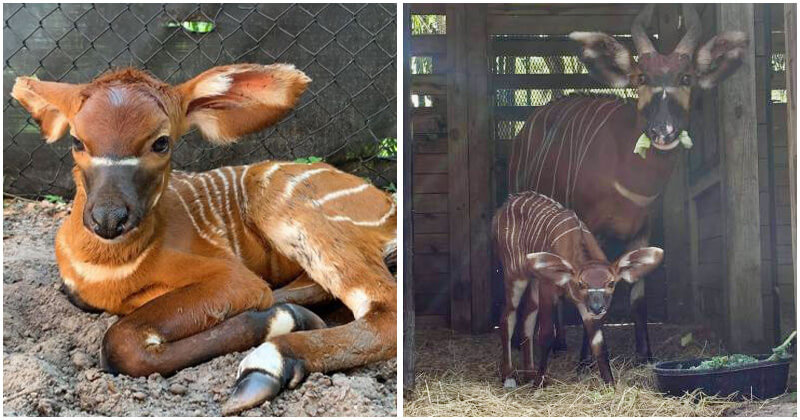 This summer, ZooTampa at Lowry Park has welcomed a really special new member into their big family in Tampa, Florida. It is a newborn Eastern bongo whose name has yet to be revealed. According to the newest announcement from the zoo, this baby bongo is a happy and healthy female. The calf was born on May 1st at 2:30 am – just in time to celebrate Mother’s Day.

At this moment, the little girl already weighs over 35 pounds (15.88 kg) and stands at about 2 feet (0.61 m) tall. Just like other Eastern bongos, this lovely cutie looks gorgeous with a chestnut coat, black and white markings on her ears and legs as well as white stripes on her back.

ZooTampa at Lowry Park is a part of the Association of Zoos and Aquariums Species Survival Plan (SSP) which is aimed at managing an ex situ species population, and it has taken part in over 100 SSP efforts so far. This baby bongo is also one of the newest progress that they have made. The infant’s parents, Blitzen and Kito, were also recommended to breed by the SSP itself.

“The birth of every newborn animal at ZooTampa is cause for celebration, but the birth of an endangered species is always a new occasion for hope,” said chief zoological officer Dr. Larry Killmar. “Bongo conservation in the wild is ongoing, but the effort continues to meet many challenges. ZooTampa has joined zoos around the world to make sure this beautiful animal continues to exist.’’

The newborn is currently living with her mother Blitzen and will be introduced to her father Kito as well as other animals at the zoo’s Africa habitat once she is strong enough. It’s also the very first baby for Blitzen and she is doing a great job taking care of her daughter.

Native to Africa, the bongo is the third-largest antelope in the world and is known worldwide for its distinctive coat as well as its spiraled horns. Compared to the Western bongo (or lowland bongo), the Eastern bongo (or mountain bongo) has a more vibrant coat that makes this stunning critter shine brightly whenever it appears. Only spotted in several mountain regions of central Kenya, this beautiful species is already listed as Critically Endangered by the IUCN.

Meanwhile, the Western bongo is also considered to be Near Threatened itself due to habitat destruction.

Twitter Thread: 36 Creative But Bizarre Names People Give Their Cats And Dogs

Blue-hooded Euphonia, A Breathtaking Glossy Blue And Orange Bird That Is Dubbed A Perfect Visual Treat

Unbelievable Discovery: Australia Found A Fluffy Crab Wearing A Sponge As A Hat

Mom Asks Daughter To Stop Talking To Her As She Almost Makes Little Sis Lose Her Cat, Resulting In Her Having To Move Out Of Their House