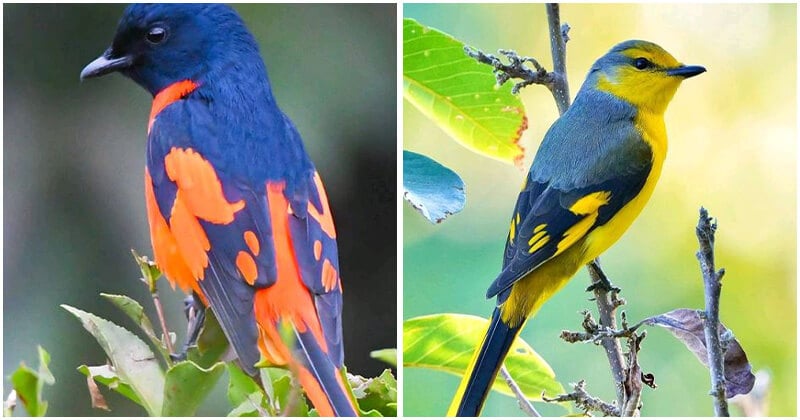 This world is full of colorful birds, but this charming cutie is still extraordinary in its own way. Meet the scarlet minivet, a small passerine bird that looks like a flying artwork with splashes of bright shades on glossy black or midnight blue background!

The scarlet minivet is also known under the binomial name of Pericrocotus speciosus. Despite its name, this stunning birdie comes in different colors. The male often has a black head and black upperparts, while its underparts could be red, orange or yellow depending on its location. These contrasting shades combine wonderfully, making this gorgeous species stand out wherever it appears.

The female also has eye-catching yellow face, belly, tail edges, rump and wing patches, but its upperparts are gray instead of black like the male.

As a small-sized bird, each scarlet minivet only measures about 7.9 – 8.7 inches in length, but it has an impressively strong bill and long wings.

The scarlet minivet’s natural habitats are rainforests and other places that have abundant trees, shrubs and grasses, including gardens. It is mostly spotted in tropical southern Asia, typically India, Sri Lanka, China, Indonesia and the Philippines.

These agile critters often team up with other birds to form small flocks to hunt insects together, mostly in the forest canopy.

Scarlet minivets’ breeding season often starts in February and ends in September. After mating, those monogamous birds build their nest together from small twigs and spider webs high up in the treetops.

The female lays 2 – 4 eggs each time and incubates them for the next 14 – 18 days until they finally hatch. The male would join its partner to feed their chicks for 2 or 3 weeks, until they are independent enough to fly away.

Thankfully, this lovely birdie’s population is quite stable at this moment. It’s not considered to be under any threat right now.

You can listen to its beautiful song here:

10+ Jerk Cats Being Shamed For Their Crimes

Parents Share Stories About The Unbreakable Bond Between Children And Pets, And They Are Priceless

Mom Couldn’t Get Baby To Stop Crying In Her Crib, Now Watch When The Cat Puts His Paw Up