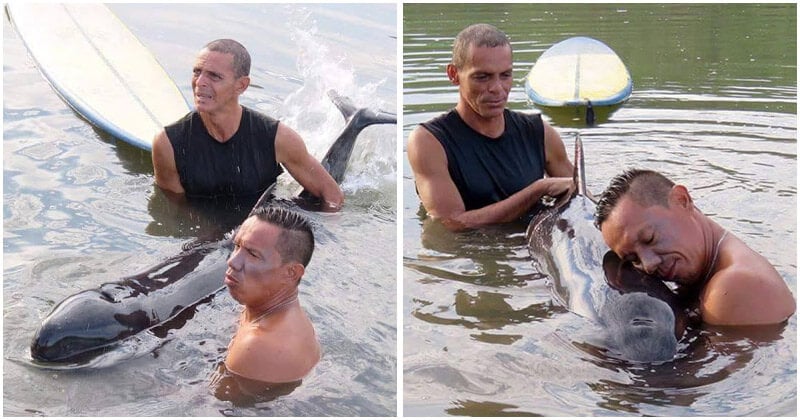 Saving one animal won’t change the world, but it will change the world for that one animal. So, if you come across an animal in need, just try the best you could offer. Together, we could make this world a much better world that’s definitely worth living in for every being.

This baby pilot whale was spotted crying for help in shallow waters in Costa Rica, and thankfully her cry was heard. The poor creature was stranded during low tide and a part of her body captured the attention of Mauricio Camareno and his friends.

After catching a glimpse of the weird “lump”, they rapidly swam towards it and started to hear the sound more clearly. Right at that moment, the kind-hearted surfers knew right away that they had to do whatever it took to save this luckless calf.

According to what Mauricio shared with Amelia Rueda, the baby whale was already exhausted.

“She was very weak and could not keep afloat,” he said.

After reaching the calf, Mauricio and another surfer immediately used all of their strength to move the pitiful gal back to the open sea so she could be able to find her way back to her natural habitat. Unfortunately, the worn-out critter was too weary to swim on her own.

So, for the next 6 hours, the two compassionate men persistently hold her at the surface of the water to help her breathe naturally. And thanks to their kindness and tireless efforts, the baby whale gradually regained her strength.

Eventually, as the tide rose, the team slowly led the pilot whale to the deeper waters and then bade her farewell. It was surely a moment that they would never forget the rest of their lives.