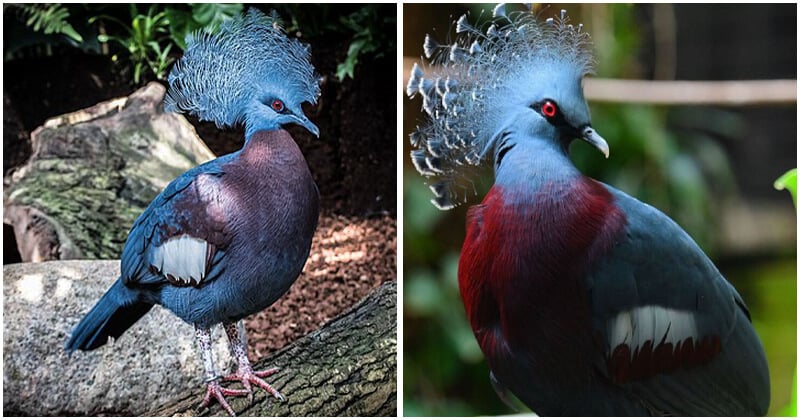 Did you know that wild pigeons could be much bigger than the cute ones you often feed in the park? If you ever have a chance to visit the beautiful New Guinea, Australia, you will be able to meet these gorgeous creatures in the forests of this charming island.

Even though these birds belong to different species, they look quite similar. The male and the female are also not much different like other bird species, both of them have stunning blue plumages, maroon chests, fierce red eyes and enchanting blue crests with white tips on their heads, making them stand out from the crowd.

The only difference here is the attitude, as the male has a habit of cooing and bowing in front of the female during courtship. These critters are surprisingly faithful too, they are often monogamous for their whole life.

After the birds find their perfect partner, they would build a nest together and place it on a tree. Once the female lays an egg, they also incubate it jointly for 28 to 30 days until it finally hatches.

The chick often fledges after 30 days, but it isn’t until 8 or 9 weeks that it can live independently and forage on its own. Crowned pigeons love to eat fallen seeds and ripe fruits on the ground, but sometimes they hunt insects too.

The average life span of this bird genus is about 20 years. Sadly, they are now a threatened species due to unstoppable palm oil production and illegal caged-bird trade.

Just take a moment to watch these striking birds in action:

Dog Eurosaurus Has Long Been Famous For His Human-Like Smiles, Let’s Meet Him Now!

10+ Baby Elephants That Will Instantly Make You Smile

This Rescue Pit Bull Thinks He Is A Cat, And His Family Keeps Sharing Pics That Prove It