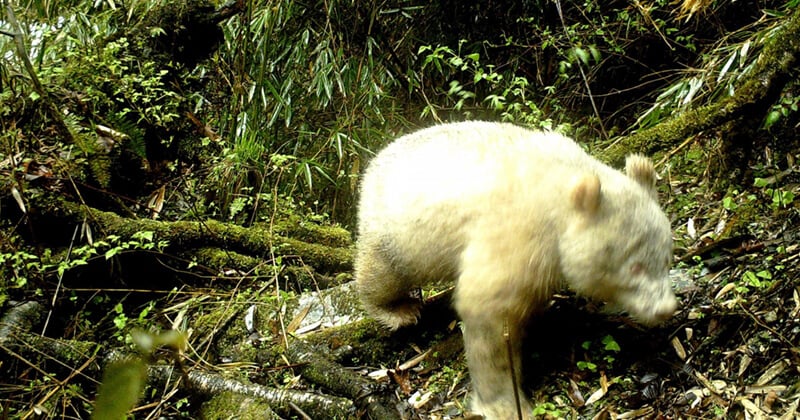 Did you know that polar bears are not the only all-white bears in this world? Yes, you read that right. Even though the perfectly white fur is supposed to be their natural characteristic, other bears could be white too. For example, the albino ones.

An extremely rare albino panda has been caught on camera in mid-April while roaming its natural habitat in a huge panda reserve in Sichuan province, China – the homeland of these lovely creatures. This priceless moment was captured by an infrared camera that was installed a few months ago to monitor wildlife in the area.

As shown in the historical photo released by the Wolong National Nature Reserve, this newly famous bear also has reddish eyes like many other albino animals and seems to be in perfect health condition. According to a statement by the Chinese reserve, the snowy-white panda is “physically strong with steady gait”. Apparently, albinism doesn’t affect its health at all. However, this congenital disorder still causes troubles to its victims as such exceptional appearances often make them unable to hide in front of predators.

After analyzing the photo, local experts are still unsure about the gender of the rare bear, but they all agree there’s a good chance that this is a young panda between one and two years old. It is also the very first albino panda to be caught on camera, which is proof that albinism is actually not so popular among these special mammals. Wolong National Nature Reserve also plans to set up more cameras in the hope of snapping more pictures of the white panda as well as tracking its development in the future.

There are only less than 2000 pandas living in the wild at the moment, making them the rarest and most vulnerable species in the bear family.

Wearing Black Bib, Crimson Dress And Blue Eyeshadow, The Malabar Trogon Is The Fashionista Of The Natural World