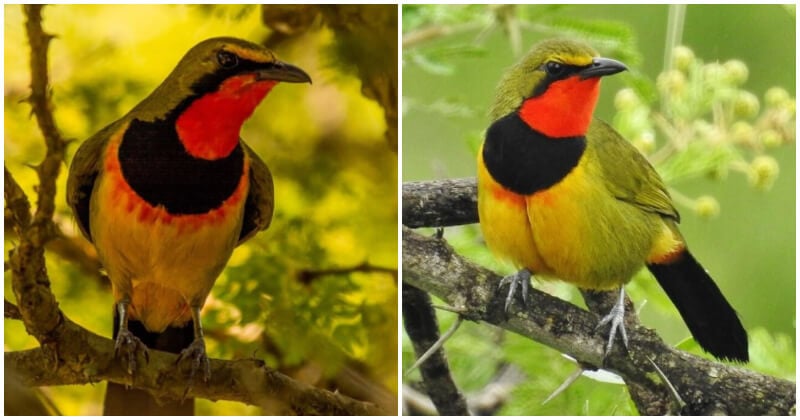 The red-capped robin is a tiny yet spectacular bird. This small passerine bird is so fluffy and chubby but wears a striking coat of vivid scarlet, black and white. That’s easy to understand why it’s called the “jewel of the bush”. This striking robin has a distinctive scarlet cap and chest. Meanwhile, its belly and shoulder are pure white, creating a stunning contrast with jet black upperparts. Its black tail also has white tips. However, both sexes have small black bills, dark brown eyes, and legs. Red-capped robins are endemic to Australia. They live in scrub and bush areas and open woodland.

This species feeds on insects and other small arthropods, mainly beetles. In August, these robins start their breeding season. It lasts four months, until January.

Male birds join the females in choosing the place to build the nest. When finding suitable sites, the males rub their bodies over possible places, trilling continuously. Interestingly, females are the birds that decide where to nest and build it on their own. This nest is made from soft dry grass and bark, with spider webs, feathers, and fur. They then lay 2-3 eggs in their nests and incubate them. The male, however, will help to feed the hatchlings until they are fully fledged. The population of the Red-capped robin has decreased over the years. They no longer can be found in some parts of the Sydney Basin, Rockhampton, and Western Australia. The main cause of their decline is the loss of habitat.

You can watch the video of this striking tiny bird below.