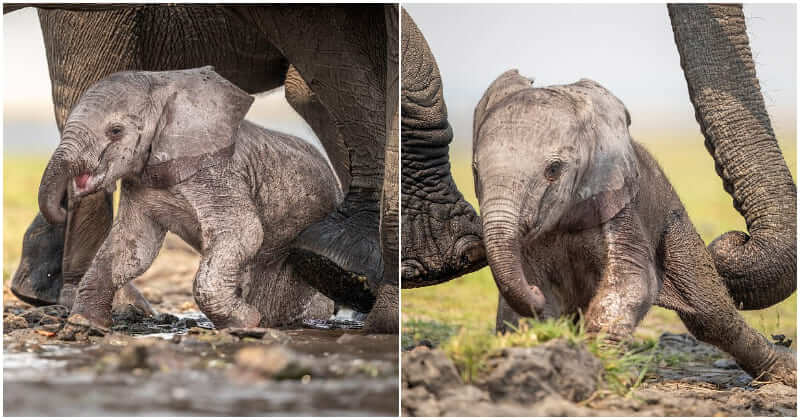 We, humans, have an incredible bond with our babies. That bond is sacred and unbreakable. However, not only humans have a strong bond like that between the parent and the young, here I’m talking about elephants.

The elephant is an emotional animal. The pictures below depict perfectly its amazing tenderness and care.

These pictures were taken by photographer Charl Stols. He is a South African wildlife photographer, currently working for Pangolin Photo Safaris as a photo host. He was on a boat cruise on the Chobe River in Botswana when he spotted a baby elephant. The young calf seemed just a few hours old at most as it was still in pink color.

The elephant family, including a mother with the newborn and two other young calves, was heading to the bank for some drinks. The newborn was possibly still learning to walk, as it trembled on its feet all the way to the water. It tumbled several times onto the slippery muddy ground. Luckily, the mother was there to help.

She carefully lifted the baby up with her trunk and feet, gently pushed it back onto its feet. She was so careful as her baby was hardly the size of her leg, tiny and fragile.

Surprisingly, the family even crossed the river to one of the islands and the brave young calf did attempt to get there by itself. The baby stuck its trunk out of the water to breathe and swam all the way to the island.

Charl Stols stayed for about 40 minutes with the elephants and was fascinated by both the young and its mother. Watching the gentle mother took care of her young and guided it to swim across the river was a touching experience for him.

He dreamed that someday he would be able to witness the birth of an elephant calf, but this was already close enough.

Meet The Cat Who Hangs Around Hospital For A Year, Ending Up Getting Hired As A Security Cat

Baby Koala Has Cute Photoshoot For Her 1st Birthday, And Her Photos Melt Everyone’s Heart