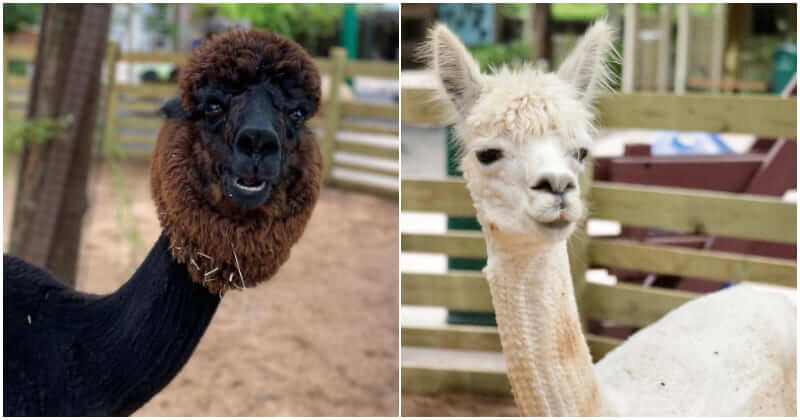 The Dallas Zoo is a 46 ha zoo located 5 km south of Dallas downtown, Texas. This facility was established in 1888, making it the oldest and also largest zoological park in Texas. Here is the home to more than 2,000 animals of 406 species. And recently, Dallas zoo has welcomed two new members to join the big family.

Janis is a 1-year-old hembra while Noelle is a 3-year-old. These two appealing creatures both came from Jammin’ Alpacas of Springtown in Texas. The owner of this farm is the former zoologist of Dallas Zoo.

Update from Dallas Zoo, two more hembras has arrived there after that. They were Blessy, 7-year-old and Augustos, 10-year-old. They have joined the alpaca family in the hope that it could create a new tourist attraction.

Let’s hurry up to meet these ladies!

There’re two types of alpacas in general, suri alpacas and huacaya alpacas. They are differentiated mainly by their fur. Suri alpacas have a cover of dreadlocks fiber while huacaya alpacas look like a teddy bear with a shaggy, bushy or wavy cover. In North America, huacaya alpacas outnumber the other type.

Alpacas are prized for their excellent wool, which has water-resistant and heat-insulating property. Furthermore, their wool can also absorb moisture and is lighter than most other wools. So humans domesticated these animals to collect wool for making high-quality clothes.

Interestingly, llama and alpaca can easily interbreed. The hybrid of these two is a completely new species called huarizo. Another fun fact is that, just like the distant relatives, camels, alpacas can also spit when disturbed, but they tend to do it less frequently.

Man Criticizes Some People For Dumping Dogs In The Country, And Reddit Community Give Him A Big Applause

Frightened Pregnant Orangutan Clings The Last Tree Of Cut-Down Jungle, And She Can’t Get Down