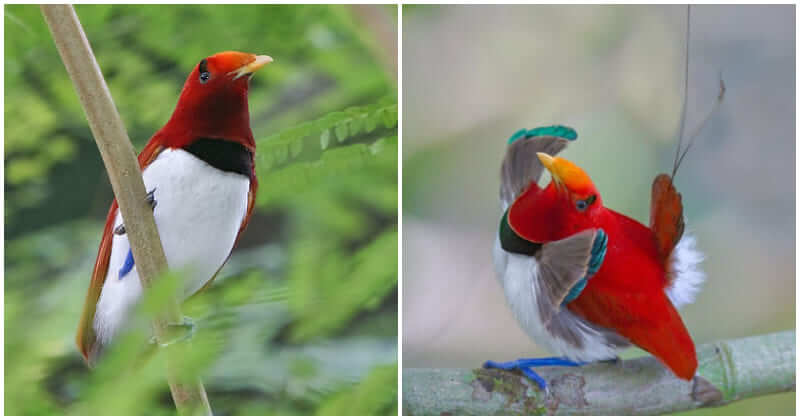 Mentioning bird-of-paradise, they are already well-known for their glorious colorful feathers. And this one is the bird that stands above all others.

When reaching maturity, male birds will have an intense metallic crimson color, which slightly turns orange under certain lights. This feature displays most clearly on their crown. Their breast has a narrow band of dark green iridescent color and a white lower part.

Especially, the male birds have green-tipped plumes with fan-like structures on both sides of their shoulders. Moreover, they also have two wire-like tail feather shafts, attached by two circular swirls of bright green feather on the tips. They will use these specialized tools to attract females in the mating season.

The female birds, on the other hand, appear far less colorful. They have their back, head, and tail painted in olive-brown and their chest is in a variegated buff. Both sexes have violet legs and an ivory-yellow bill.

This species prefers to live in the lowland rain forest or woodland edge. They are endemic species to New Guinea and surrounding islands, including Aru, Salawati, Missol and Yapen. They can feed on a variety of fruits and arthropods. They usually join with other birds when seeking those insects in the lower forest.

The king bird-of-paradise has a long breeding season, at least from March to October. As a polygynous species, the male will continue to court other females after mating. The courtship involves complicated dance movements, feather manipulations, body posturing and complex vocalizations. The male birds will expand the pectoral feathers, curl the tail upward and perform a set of acrobatic movements, hanging upside down and swinging like a pendulum.

After mating, the female bird will build a nest into a tree cavity, then lay two eggs inside. The incubation period lasts for 17 days and when the eggs hatch, she will take care of the chicks without the assistance of her mate. Surprisingly, female birds can mate with other bird-of-paradise species, as the hybrids between the King bird-of-paradise and Magnificent bird-of-paradise have already been recognized.