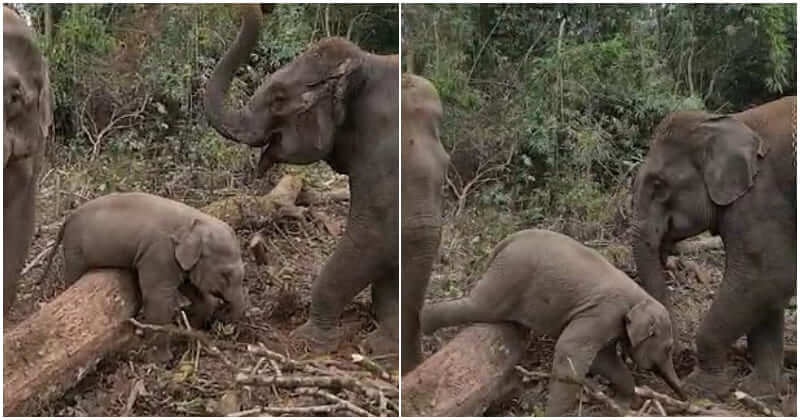 The elephant is an intelligent animal. They can perform complicated tasks, have an excellent memory and can even do art. That’s true but like humans, their knowledge and abilities are built up over years. So for the young calves, they are known to be adorable like human babies, and they are really clumsy sometimes.

Three elephants in the video are regulars in Chowkham village, North East India. The baby elephant Phantom was with his mother, Maruti, and his older brother Babulal. The family was foraging in an area that was cleared by a lumberman.

The funny scene was filmed when he tried to come across a fallen tree. He made his front legs to the other side but unfortunately, his belly got blocked by the tree as he was too short. He tried to climb over but couldn’t get it through and ended up hanging over the fallen trunk.

He struggled for a while and then with some pushes from his mom, he eventually made it through.
It’s not easy being this small!!

Phantom and his family are known by the locals. They live in the forest that surrounds the camp. Tourists and people in the village enjoy feeding them every time they come over.