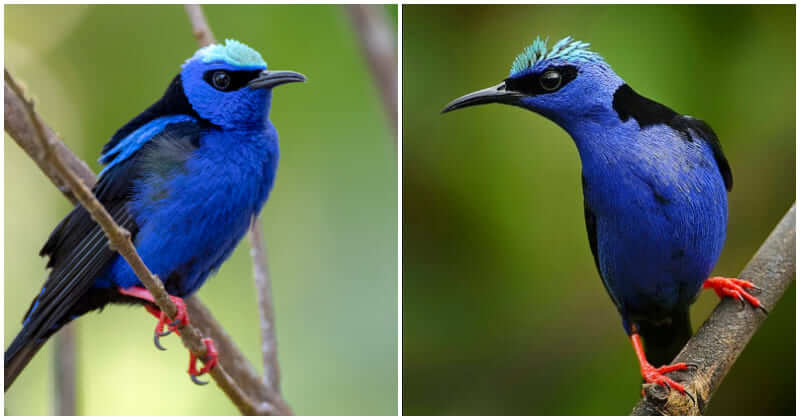 Stand out from the background, coated in a bright blue plumage with a pair of noticeable red legs, let’s meet the red-legged honeycreeper.

The red-legged honeycreeper (Cyanerpes cyaneus) is a small songbird species in the tanager family (Thraupidae). They can be found in the tropical region of the Americas, from southern Mexico to Central America, Peru, Venezuela, Colombia, Brazil, and Cuba, where they’re possibly introduced. This species can sometimes be seen in the southern part of Texas.

Like many other bird species, the male birds look much more colorful than their female counterparts. They have bright violet-blue feathers with a Zoro-like black mask surrounding their eyes. Their mantle, wings, and tail are all black, creating a perfect contrast for their eye-popping bright red legs. They also top themselves with a turquoise crown on their head.

Female and immature males look similar with greenish-yellow plumage and faint streaks below. The red color of their legs is dullest on young birds. When flying, their underwings flash a shade of bright yellow.

This species often occurs in a small group of 10 to 20 on the forest edge, open woodland, and field. Sometimes they form a larger flock. They like to forage in the canopy and feed on various types of insects, fruits, berries, and nectars.

In Costa Rica, red-legged honeycreeper has the breeding season between April and June. The female bird is in charge of nest building, normally in a bush or tree meters above the ground. The cup-shaped nest is made from stiff fibres and is attached to branches by cobweb, the female will lay two eggs inside when the nest is completed. The incubation will last for 12 or 13 days; when the eggs hatch, the nestlings will be fed by both parents.

Although their global population has not been calculated to be exact, the red-legged honeycreeper is a common bird species and is widespread over a vast region. That’s why this bird is not on the IUCN Red List.