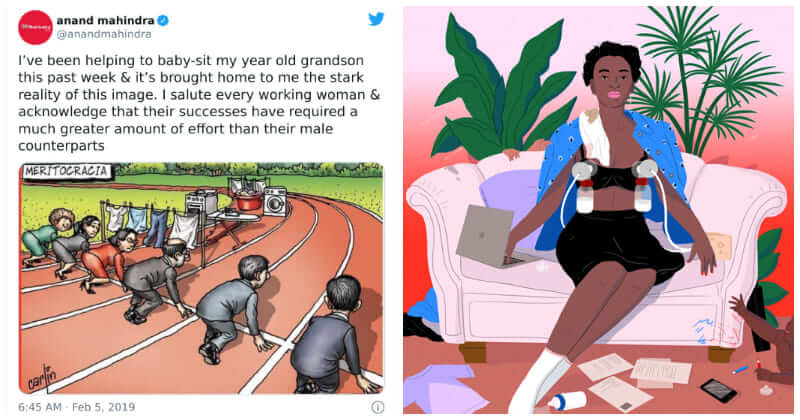 For a long time, it has been said that a woman has to work twice as hard and be twice as intelligent, but all she gets is half as much credit as a man. Is that equal? Whether you think it’s unfair, this is the way our world is working. Women make up the majority of the working poor, earn less income, and are more often suffered from under- and un-employment and unstable working conditions than men. Moreover, they are also expected to take care of their family, children, and themselves. Those incredible things have angered a lot of people.

Gender equality is not only a primary human right but an essential foundation for an equal, prosperous and sustainable world. Many artists, no matter their gender are, have tried to show the world this injustice by their vivid illustrations. Their great works bring a lot of deeply satirical implications, which surely hit the nail on the head. For example, one of their illustrations shows male and female business people lined up for a race on the same track. While the men have no barrier in their paths, the women have tons of household chores in front of them. All illustrations below are goona give you a thoughtful look at this controversial problem. Let’s scroll and check: Stop complaining that women are always taking so much time to dress up. What makes girls not confident in themsleves is social prejudice. If girls going out without makeup, they are said to be ugly and not take care themselves. If they put much makeup on, they are seen as “artificial beauty”. The picture could speak out many women’s minds exactly. They’re trying their best to balance between work and family, which would explain why they don’t have enough time for themselves. Men just need to be successful at work because beside them are hardworking wives who are willing to give up their own careers to be housewives. So if women succeed at both work and family, they are superheroes. “Girls are beautiful, need to be beaiutiful” – that sayings are like ropes binding them and setting their minds since they were born. And they also limit woman’s creativity and stop them from being themselves. “Gender equality” is something everyone has ever heard about, but the mindset of “women are weaker than men” is shown directly through many people’s attitudes. Please, do somethings to make it not a slogan to spread anynmore. Languages are barriers, but problems are the same. Sexism is something that has existed all over the world for such long time no one can remember. A woman has to work twice as hard and be twice as intelligent, but all she gets is half as much credit as a man “You’re excellent, but after 30s you will get married, with children and family, so no one can guarante that you can stick to our company. That’s what we are considering whether hiring you”. This really doesn’t make sense. “Girls shouldn’t be so intelligent and talented, what they should be good at is to be a good daughter , a good wife, a good mom”. Or ” You shouldn’t be better than your husband to keep your marriage happy” . What do you think about these? We both try the same, put the same effort, but why are my award and his different? Give us the reasonable reasons why women can’t go so high as men at work and we can’t get that high salary like men? Men can be grooming and go out for parties, have fun and never worry about his family. But women can not. Behind every successful man there stands a woman! What is waiting for a girl after the wedding? Be stronger and confident in yourself. Gender is which no one can’t choose, but your behavior and the way to face reality can make you shine.

A Series Of Illustrations Of Chunky Animals, And They Are Incredibly Adorable

“Before – After” Illustrations Of Famous Characters, And They Just Take Fans By The Storm

These Hilarious Comics Perfectly Capture Daily Struggles Of Being A Woman