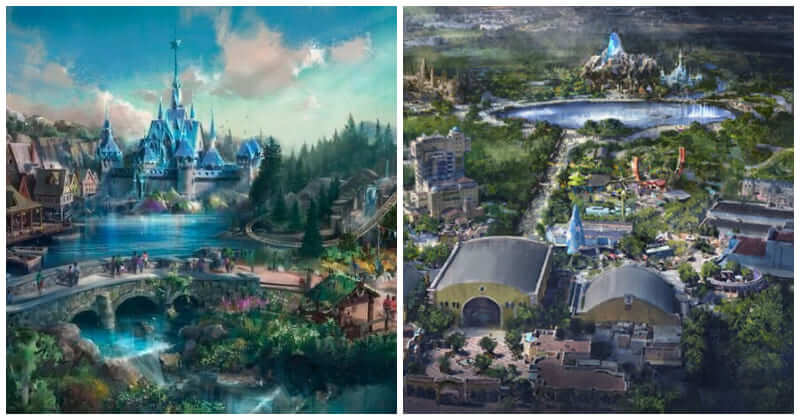 Disney theme parks like Disneyland or Disney World always receive the great attention of all Disney lovers. With gorgeous castles, epic rides, and amazing parades, visiting these amusement parks is every kid’s (and adult’s) dream. Entering that place is like a dream comes true, as you feel like you have just stepped into the Disney world.

Because of the high level of fan interest, every time Disney makes a statement, it generates a lot of buzz and conversation. Disney has announced the expansion of a brand new section inspired by the film Frozen to Disneyland Paris. There will be two eating areas and food stands around the park, according to Disney. Fans are already enthralled by the splendor of this new place, despite the fact that it is still in concept art.

This tourist attraction will be built on a 7.5-acre plot of land and will open in 2023. If you still wonder why this expansion project of Disneyland Paris has received so much support from fans, let’s check out the concept art below!

#1 As you can see, Arendelle’s castle is situated in front of a massive mountain. How can we resist this epic world?

The land of Arendelle, inspired by the Frozen movie, will welcome visitors to the home of Queen Anna, Queen Elsa, Olaf, Kristoff, Sven, and other Frozen characters. Elsa’s ice palace and the kingdom of Arendelle are surrounded by a snow-capped mountain.

#2 Additionally, there will be a replica built of the Frozen Ever After ride. I can’t wait to step into this world in 2023! Although Disney has not established an official opening date for Arendelle Castle until 2023, many Disney fans are thrilled to see the castle in the next two years. Over the next several years, there will be plenty more Frozen wonder, such as the Tokyo Disney Sea’s Fantasy Springs with Frozen feature. The biggest of them all, though, will be Disneyland Paris’ expansion.

Are you looking forward to the new Frozen land at Disneyland Paris? Will you be making a trip to see it when it first opens? Let us know in the comments what you’re most curious to know about this place!