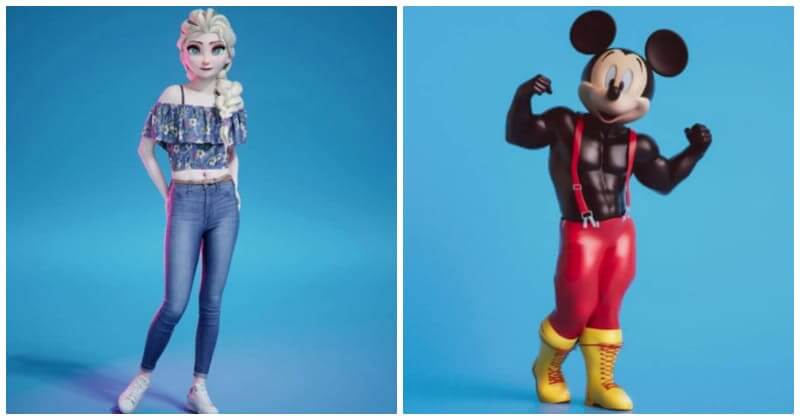 Did you notice that most of the cartoon characters are drawn with smaller body sizes than they actually are, regardless of it being humans or animals? In Disney cartoons, it can be seen that the characters are all depicted by animators with some body parts of uneven size. For example, the head becomes larger, the lower body size becomes smaller, especially the eyes are larger compared with the whole proportions of the face. Changing the size of the body compared to normal people aims at making the cartoon world smaller, more loving, and more dynamic.

Now imagine if Disney cartoon characters had human-like bodies, what would they look like? Fortunately, Mohamed Halawany embarks upon this idea and makes it come true. He is a self-taught Egyptian artist whose “Real Toons” series has recently stirred up the cartoon community. This artist transforms the cartoon heads of legendary Disney, classic animation, and video game characters into human-like bodies and styles. Let’s take a look at the Funny cartoon human version created by Halawany right below. Walt Disney created Minnie Mouse, an animated, anthropomorphic mouse character. She has been Mickey Mouse’s long-term girlfriend, and she is known for her sweet disposition, large head bows, and polka-dotted dresses. Dexter appears in “Dexter’s Lab,” a 2017 American animated adventure-comedy family film based on the Cartoon Network animated television series of the same name. He is a boy genius and inventor who keeps a hidden laboratory in his room hidden from his parents. She is Dexter’s older sister, and she always gets into Dexter’s lab and inadvertently sabotages his experiments. Woody is a toy based on a character of the same name from a 1950s children’s television series called Woody’s Roundup, as revealed in Toy Story 2. Donald usually wears a sailor shirt, cap, and a bow tie. He is well-known for his semi-intelligible speech as well as his mischievous, temperamental, and pompous demeanor. Mario is an Italian plumber who first appeared in Nintendo’s Super Mario franchise. He is not as tall as his younger brother Luigi. Elsa the Snow Queen is the deuteragonist in Disney’s animated feature film “Frozen,” which was released in 2013. Elsa appears calm, reserved, and regal in her role as Arendelle’s queen regnant. Sonic is a ‘supersonic’ hedgehog who teams up with local town sheriff Tom Wachowski (Marsden) to stop Dr. Robotnik (Carrey), a villainous mad scientist who wants to exploit Sonic’s superpowers to control the world. In Disney’s 1992 animated feature film Aladdin, the Genie is one of the three protagonists. He is a larger-than-life spirit who serves whoever owns the magical lamp in which he resides. He is a mad scientist – starring in the movie Rick and Morty in the framework of the Cartoon Network and purchased by Disney. Homer Jay Simpson is the fictional protagonist of the animated television series “The Simpsons” and the father of the Simpson family. Trained and raised by Master Splinter, Mikey knows all the moves to defeat the evil Shredder! Michelangelo was also a joker, a freedom fighter. Women Of The Zodiac Through 12 Interesting Disney Memes

10 Actors Who Have Their Breakout Roles Later In Life