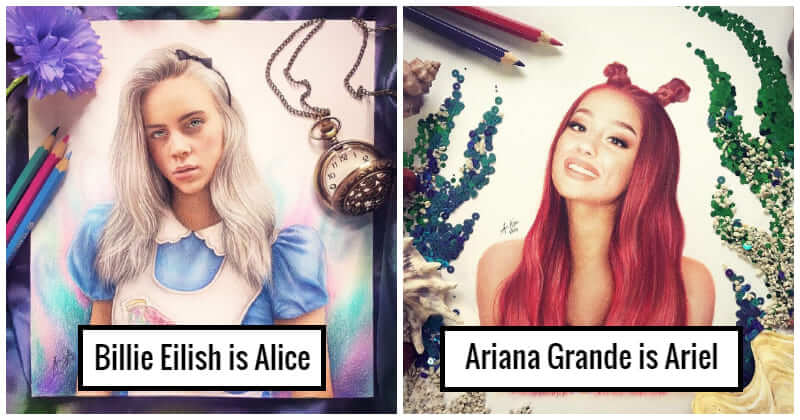 The live-action versions of Disney movies have always piqued the interest of fans all around the world. Perhaps it’s because they’re always interested in seeing who will be cast to play legendary characters in famous animated movies. Actors in the live-action version must not only have acting skills, but also match the look of the princesses, princes, and other characters in the film.

Actors like Angelina Jolie, Emma Watson, and others who have starred in Disney live-action films have had a lot of success. The audience is continually buzzing with anticipation while waiting for Disney to announce new projects with a fresh cast. And Filipino artist André Manguba, who is a die-hard Disney fan, shares the same question.

With his limitless creativity and artistic talent, this talented artist has re-imagined celebrities as Disney characters, and to be honest, it’s quite fascinating. Let’s take a look at his 17 best artworks and don’t forget to let us know which celebrity suits the Disney character’s look the best! The artist once shared “I’m clearly obsessed with Riverdale and I loved Disney growing up”, so he redrew Alice & FP in Riverdale as Belle & Adam to show a combination of two worlds. It’s so fascinating, right? The fake-relationship-turned-to-love-in-real-life couple that came out of the Spider-Man movie is still very romantic, even when redrawn as the main couple in the movie Corpse Bride. Another couple from the hit teen movie: Riverdale. If in the movie, millions of viewers have to regret the unspoken love that Reggie has for Veronica, then here you are, they look perfect as a couple from Mulan. She looks really stunning as a Disney princess! This is definitely a stronger, sexier version of the old Cinderella. Who cares about the stepmother and the two evil sisters?

#5 Tom Holland and Zendaya as Milo and Kida (Atlantis: The Lost Empire) The artist is definitely a big fan of this couple. But hey, they look perfect for any cartoon couple, don’t they? I’ve been really drawn to Zendaya’s captivating eyes! This is the Riverdale couple that the artist likes the most: Cheryl and Toni. “To be honest, this took me the longest to conceptualize because I wanted the best choice of Disney characters to portray them,” André shared. “I thought Ariel and Moana would fit them perfectly because of the fan theories telling how they could have met in the same universe. Not to mention the perfectly matching hair color of Cheryl and Ariel.”

#7 KJ Apa and Camila Mendes as Hercules and Megara (Hercules) Having mentioned the Riverdale couple, how can we ignore the Veronica & Archie couple, right? André shared the idea when drawing this couple: “Varchie reminded me of Hercules and Megara’s relationship. Archie matched Hercules’ heroic traits and just like Megara, Veronica had a sultry and dark side to her too.”

#8 Dylan Sprouse and Barbara Palvin as Tarzan and Jane (Tarzan) Look at Dylan and Barbara, they really are happy and wild as the couple in the movie Tarzan. Disney, let’s do a live-action remake of this movie and remember to cast them! Of course, Ariana’s sweet smile and melodious voice are definitely the most similar to Ariel!

#10 Camila Mendes and Lili Reinhart as Elphaba and Glinda (Wicked) This is the most attractive witch duo I’ve ever seen! I didn’t believe Camila would look so good with green skin, and Lili could appear so powerful. “Bughead for example gave me the same vibes as Rapunzel and Flynn Rider. Lili’s strong-willed personality and femininity also matched Rapunzel’s.” – André said. And it’s true, the Bughead couple in Riverdale could be that famous because people are so passionate about Betty’s strong, curious personality and Jughead’s romance.

#12 Selena Gomez as Belle (Beauty And The Beast) Sweet, brave, and smart, besides Emma Watson, there is a Selena Gomez who also fits Belle’s image very well. I’m sure any beast would fall for that charming smile!

#13 Noah and Lana Condor as Aladdin and Jasmine (Aladdin) The detailing of Jasmine’s outfit has also been changed to be more discreet and more traditional (yes, Lana is Asian-American) showing how sophisticated the 20-year-old artist is! This is definitely the hottest and most passionate Moana you’ll ever see! Hailey is also the actress chosen by Disney to star in the live-action version of The Little Mermaid. A cool and mesmerizing mermaid, why not? This is definitely the most interesting and innovative combination in this series! Billie Eilish in wonderland? Surely everyone will want to join her tea party and adventures! Count me in!