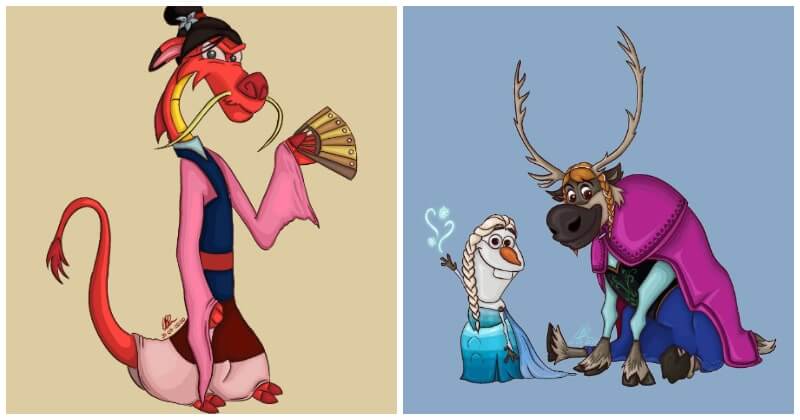 In Disney’s famous animated films, besides the main characters such as princesses or princes, the sidekicks also play an important role. They are often adorable animals, act as the main character’s best friends and help them overcome their challenges. These sidekicks complete the movies, make them be more meaningful, and catch everyone’s attention. However, not many people really appreciate the existence of these faithful sidekicks.

With the desire to honor the sidekicks who have made a silent contribution to the success of Disney movies, a talented artist named HatterpillarArts came up with the idea of recreating these sidekicks as their beloved princesses. Thanks to his fanarts, the audience will be more interested in these sidekicks. In fact, her paintings have received positive comments, as she shared: “The most rewarding thing about any series, but especially the Disney project, is the audience reaction. These pieces appeal to, old or young, and there’s always so much happiness surrounding them in the comments.”

Scroll down to explore these amazing pictures! Meeko is a raccoon and one of Pocahontas’ animal friends. He is sly, mischievous, and loves to steal things from people. Pascal is Rapunzel’s pet chameleon, with the ability to change color based on his emotion. He and Rapunzel grow up together and they can be considered to be best friends.

#3 Louis in “Princess and the Frog” He is a trumpeter alligator and his dream is to become a jazz musician. Thanks to him, the journey of Tiana and the frog is much more interesting. Each HatterpillarArts’ fanart is meticulously drawn, as he once shared: “There aren’t many challenging things about it, but if I had to say something, I’d probably say the hours I put into the work.” and this above picture is an example. Rajah is a loyal tiger who always tries his best to protect Jasmine.

#6 Olaf and Sven are Elsa and Anna Olaf and Sven are two famous characters with all the “Frozen” fans. Olaf is Sven’s closest friend and the two are regularly seen together.

#7 Pua in the shape of Moana Is this little pig cute enough to make you fall in love?

#8 Flounder swaps his outfit with Ariel His new image is so hilarious, right?

#9 The Owl as Princess Aurora. Mushu is the character that inspired Hatterpillararts about this unique idea. He once said: “The idea came about when I was watching Mulan, and I just started thinking about how funny it would be if Mushu was dressed up as Mulan with the fan and the flower in his hair and everything.”

Young Boy Fights With Vicious Dogs To Protect His Siblings