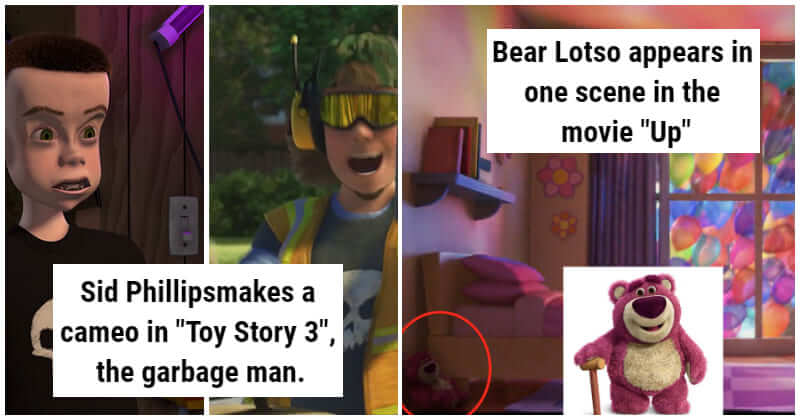 Pixar has been a big name in the movie industry, especially computer-generated animation. And the reason why Pixar’s movies are always appealing to people of all ages is that they have lots of exciting hidden secrets and heartfelt messages.

“Toy Story” is not an exception. It is a 1995 American computer-animated comedy film produced by Pixar Animation Studios and released by Walt Disney Pictures. The film is considered one of the most important movies of the last 50 years and remains a lot of values till these days. You may think that is such a hyperbole comment for the movie, right?

Well, you don’t have to go to infinity and beyond to find out why because we’ll get into hidden messages and interesting facts that you might have missed. Keep scrolling!

Do you notice that the red thread Andy used to sew Woody’s torn arm back on which appeared in “Toy Story 2” is still visible in “Toy Story 4”? It would be a missing if this major piece of continuity wasn’t in the movie. Sid Phillips was the main antagonist of Toy Story. He was Andy’s evil next door neighbor. The guy was mentioned by Buzz in Toy Story 2. He also makes a cameo in “Toy Story 3”, the garbage man. One Toy Story Easter egg references Tim Allen’s famous role in “Home Improvement” as the tools that Sid used are Binford’s. Binford is the company that sponsors the show “Home Improvement”. Tim Allen whose Buzz Lightyear’s voice was the star of that show. In “Toy Story 4” (2019), Bo Peep’s sheep found a bottle cap which is a grape soda badge in “Up”. It has symbolic meaning of Carl and Ellie’s relationship since childhood. Pixar is no strange to place Easter eggs in their movies and “Toy Story 4” has a cameo from “Monsters, Inc”, character Boo. She appeared in Bonnie’s kindergarten class and at the carnival. As Andy became a young adult ready to move to college, many things changed including his handwriting. Andy’s handwriting got better as he grew up in Toy Story. Pixar’s production focused a lot in details. The aging codger Geri from the famous Pixar short “Geri’s Game” made a cameo appearance in Toy Story 2 as “The Cleaner” who cleaned up Woody in “Toy Story 2” (1999). A Bug’s Life is not an exception for “Easter Egg”. There is a scene in “Toy Story 2” which Mrs. Potato Head is seen reading A Bug’s Life storybook.

In “Toy Story 4”, Forky points his feet where Bonnie wrote her name on towards Gabby’s mirror to see the name on the bottom of them. Lots-o’-Huggin’ Bear is the main antagonist of Toy Story 3. He is a large, pink strawberry-scented teddy bear who used to rule Sunnyside Daycare. Evil “Toy Story 3” Lotso bear made a cameo appearance in Up when he was first spotted next to Dee’s bed when Carl’s house flies past her window outside.

10+ Celebrity Fails That Made Us Burst Into Laughter

9 Celebrity Facts That Make You Open-Mouthed