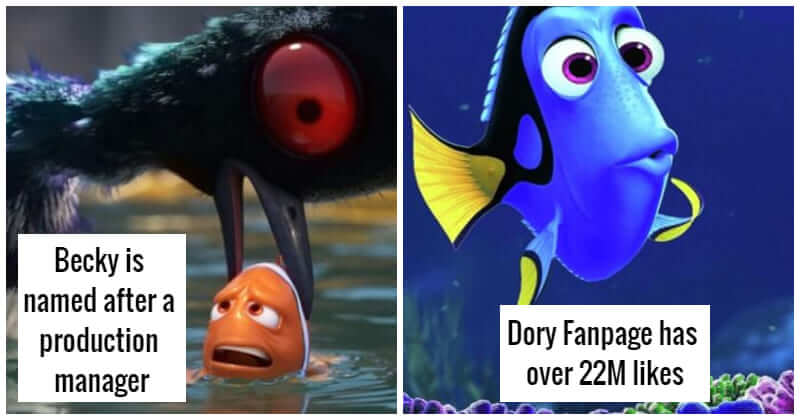 Finding Nemo is a 2003 American computer-animated adventure film produced by Pixar Animation and 13 years later “Finding Dory” hit theaters. The underwater masterpieces follow the journey of Nemo, Marlin, and Dory in which they met lots of friends from the ocean, encountered challenges, and gradually realized priceless values in their life.

Besides what we literally see on the screen, we may have not noticed that there are science lessons or hidden behind-the-scenes facts from the films that probably arouse our curiosity. Or if you think you know everything about Dory and Nemo, you may want to think again. Here are 9 secrets and fun facts revealed by Disney to their audience. Keep scrolling! #2 Nemo is voiced by a different actor Alexander Gould, who voiced Nemo in “Finding Nemo,” is 22 years old. So filmmakers had to recast the character. Hayden Rolence was called on to voice the junior clownfish in “Finding Dory” when he was 12 years old. It is revealed in Finding Dory that Dory’s ability to ‘speak whale’ in Finding Nemo was taught to her by her friend Destiny the whale shark. However, whale sharks aren’t real whales and thus do not communicate like whales, so she never could have taught Dory in the first place.

#4 Becky is named after a production manager Do you know that Becky, an offbeat, kooky loon who has a big crush on Marlin is named after production manager Becky Neiman-Cobb There are over 25 million likes on Facebook for Dory Fanpage, which reaches farther than many superstars.

#6 Sia performs a song in the film #7 Sharks in the movie Bruce, a great white shark, has several rows of animated teeth in the film, which typically has around 300 teeth. Sharks continually lose their teeth over time and the developing teeth will then rotate in and replace them. In fact, there are 29880 teeth during a white shark’s lifetime. Coral and Marlin laid over 400 baby fish eggs. They were protecting them by their lives at the beginning of the movie. On average, clownfish can lay up to 1,000 eggs.

Source: Inside the Magic In one of the most famous scenes from the movie, Dory says she is able to speak whale. In fact, Whales and fish have their own language to communicate. They communicate through specific sounds, clicks, and rhythmic noises.