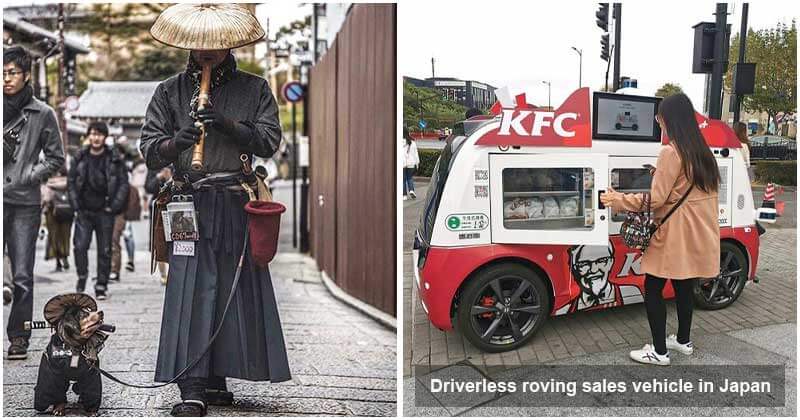 Japan has a deeply rooted culture and fascinating inventions. When it comes to Japan, some particular things that will come to our minds are kimono, anime, cherry blossoms, bullet trains, innovative constructions, and some weird reality shows. Actually, Japan has many more amusing things that we will never know if we don’t have a chance to witness in person. And those are so unique that none of the countries in the world has, except for Japan.

So, in this post, we’d like to share with you some interesting facts about life in Japan, showing how special this country is. It’s really a dreamy destination you should visit at least once in your whole lifetime. They have unusual and outstanding things that will absolutely make your jaw drop out of admiration. Let’s scroll through 22 pictures in the list below to learn more about this amazing island country. #2. “Train tracks in Japan have special pathways for turtles under them to avoid turtle casulaties and train delays” #3. “Train seats in Japan facing outwards so you can see the scenery” #4. “In Japan some restaurant is really private. You are sitting in a corner, where no one sees you, a sluice opens in front of you, the chef’s hands come out and it serve you without looking” #6. “There’s an ancient Japanese pruning method from the 14th century that allows lumber production without cutting down trees called daisugi” #7. “On many Japanese toilets, the hand wash sink is attached so that you can wash your hands and reuse the water for the next flush. Japan saves millions of liters of water every year doing this” #8. “Flood in Japan, just realized there are barely any floating trash and debris” #9. “Tree in Japan being relocated to make way for a road” #10. “The gum I bought in Japan comes with a stack of paper for easy disposal” #11. “This train stop in Japan has no entries or exits, it has been put there merely so that people can stop off in the middle of a train journey and admire the scenery” #12. “This 400 year old bonsai tree survived the bombing of Hiroshima in Japan” #13. “Subways in Japan have Women Only cars” #14. “These sprinklers on the road near the ski resort I’m at in japan to keep the road from freezing over” #16. “This is a rice paddy. Farmers in Japan plant specific rice species to make these amazing artworks”

#17. “Bus drivers in Japan, striking in such a way that people don’t suffer” #18. “When you need help at a train station in Japan, station staff will literally pop out and help you” #19. “Somewhere in Kyoto, Japan, there’s this man and his dog. He plays the flute, the dog is cute, and that’s how they earn some loot” #20. “Pets button on a high end residential building elevator in Tokyo. Those who ride the elevator with a pet press it so an HEPA filter purifies the air and a silent alarm alerts those with allergies to avoid riding it until the air is clean again” #21. “Car is parked in the driveway which is built over a small stream in Kyoto, Japan” Laugh Out Loud At 15 Funniest Stories Between Scorpios And Money

12 Facts That Show How Pisces React When They Are Hurt

Single Dad Adopts 5 Siblings So They Can Grow Up Together

7 Secrets That Will Help You Understand Better A Capricorn