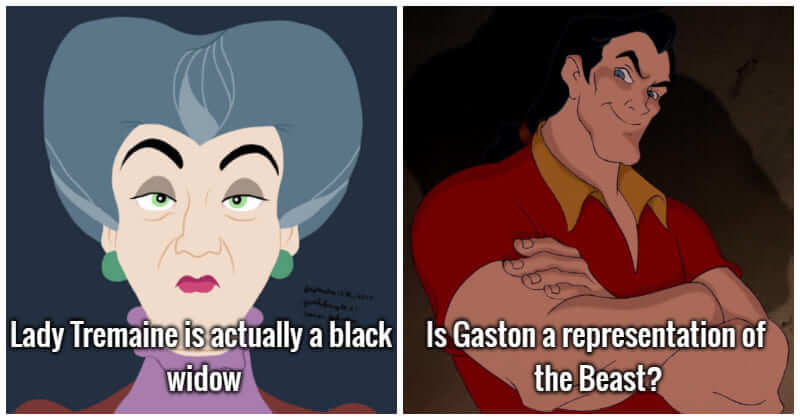 A film will only become popular if it attracts a lot of discussions from the audiences. Therefore, all the filmmakers intentionally incorporate a few special twists into their films, create space for the audiences to express their curiosity and understanding.

Nowadays, with the development of the Internet, it is easy for people to say their theories about their favorite movies. Some can be quite confusing, while others are widely accepted.

Disney villains also have a lot of theories surrounding them. It could be that Captain Hook is actually a lost boy, or that Lady Tremaine is a black widow. Let’s check them out! Lady Tremaine is actually a black widow. When Cinderella’s dad married her, he was still very healthy but just a short time after that, he died unexpectedly. Is this a coincidence or a pre-existing conspiracy?

#2 Gaston (Beauty and the Beast) In the movie Beauty and The Beast, is Gaston a representation of the Beast if The Beast didn’t turn into a harrier version of himself? In the first Toy Story movie, Sid may be a villain who torn apart his toys. But fifteen years later, he becomes a local garbageman and always picks out valuable things. In this case, it’s toys. Disney fans wonder that “Does Sid become a garbageman to rescue toys from being thrown away?” In The Lion King, Scar didn’t run when Simba told him “Run Scar and never return”. One theory that explains this plot: Scar didn’t think that Simba was better or stronger than he was, so Scar didn’t need to run, which resulted in his death later. Maybe Hans was bewitched to become evil. At first, he was on Anna’s side but after he got back to the castle, he changed his mind and became an evil. One Frozen’s fan explains that Hans could meet the Trolls and be turned into a bad person by their magic. What is the truth of Yzma’s origins? There are a lot of theories about this but there is no exact answer. Some people say that she worships Hades, others say that Megara is a younger version of Yzma, etc. Hades’ hair color presents his emotion. Normally, his hair is blue but when he gets angry, and it turns red, yellow, or orange. Maleficent helped the Queen to have a baby. The King and the Queen had difficulty getting pregnant. Therefore, there is one theory that the Queen had asked Maleficent to assist her and promised to praise her in the Court. But after Aurora was born, she betrayed her word and that’s why Maleficent cursed Aurora. Syndrome is still alive in The Incredibles II although he was killed at the end of the first film.