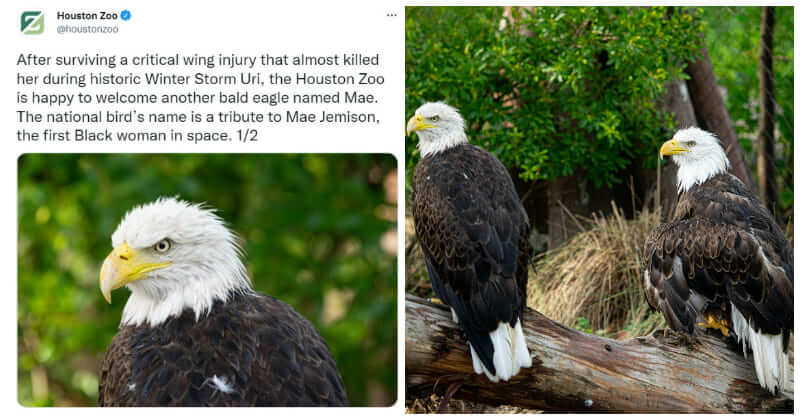 Bald eagle is known as the US national bird, so their protection has been a foremost priority of the government. Although their population has increased during recent years, it’s important that authorities should issue policies and conservation programs to maintain the number of bald eagles.

Earlier this year, a devastating storm occurred in Texas, paralyzing most of the state and taking more than 100 lives. A survivor of the storm, bald eagle Mae, was happy to find forever home at Houston zoo after a long ride with her injured wing. Her name was given as a tribute to Mae Jemison, the first black woman in space.

The Houston zoo was happy to welcome the bird, as they shared on Twitter.

After surviving a critical wing injury that almost killed her during historic Winter Storm Uri, the Houston Zoo is happy to welcome another bald eagle named Mae. The national bird’s name is a tribute to Mae Jemison, the first Black woman in space. 1/2 pic.twitter.com/NZcSCjs0T9

Before landing in the zoo on May 6, 2021, Mae had been found suffering an open wing fracture in Huxley. Last Chance Forever, a wildlife rehabber for birds of prey, treated her with antibiotics as first aid. Several days later, they moved her to Angelina Animal Hospital, in Lufkin, for further evaluation.

Mae spent two months recovering from the wound, but its impact left her unable to fly. The eagle who couldn’t be released back to the wild finally arrived at Houston zoo, her forever home. She underwent a quarantine period before being introduced to Sally.

Sally was another bald eagle brought to the zoo due to her inability to fly. She formed an instant friendship with Mae, and the two became inseparable. On June 15, the pair was moved to the Texas Wetlands bald eagle exhibit, as reported by Houston zoo. It was heartwarming that Mae and Sally, two warriors in the storm, are now happy together. Next time when you come to the zoo, will you visit these friends?

Grandpa Is Bought A Cat, Then His Life Changes Incredibly!