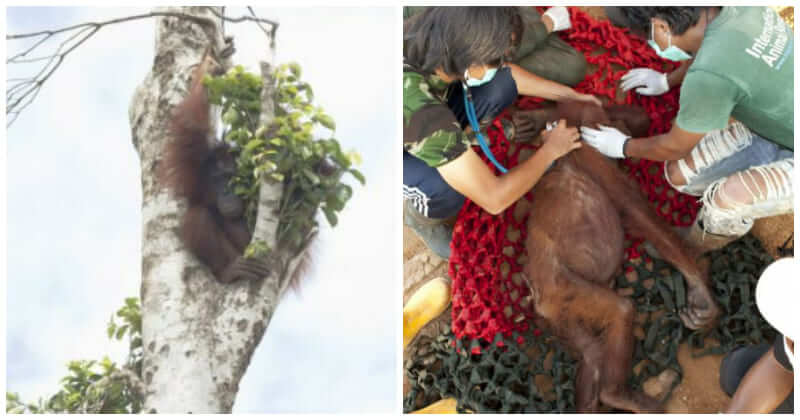 Over the past several years, people are getting more and more aware of the impact of deforestation. Television has talked about animal species being on the verge of extinction due to habitat destruction, and floods rising in frequency and intensity.

Recently, a giant rain forest razed in Indonesia has nearly driven a pregnant orangutan and her unborn baby to the end of their lives. The pregnant mom, named Boon-Mee, was frightened by machines that came and tore down her jungle home within days. She clung in panic to the last tree in the forest, and she was too weak and scared to go down. Boon-Mee was not the only one that suffered the fate of getting homeless and being starved when palm-oil plantations devastated the tropical habitat. When the UK charity International Animal Rescue (IAR) came to save the creature, they found three other orangutans, including one pregnant female, a mom, and her child. “We were appalled at the condition of these orangutans,” said Karmele Llano Sanchez, an official at IAR.

“All of them had gone through long periods of starvation before we rescued them. The area where they were found was too small to provide them with sufficient food because the company had cleared most of the forest,” she added. “One of the orangutans had lost her baby, which was probably killed before the rescue team arrived.” As Boon-Mee refused to leave the tree, rescuers needed to shot her with anesthetics and took her to the refuge where the three other orangutans were moved into later. All of them are now in the process of recovery.  Boon-Mee has recently welcomed her baby. IAR believes that there are other apes still trapped in the non-existent jungle, and it’s important to rescue them. “The only positive note is that, on this occasion, rather than chasing them away or killing them, the palm oil company did the right thing and contacted us so we could move them to a place of safety.” shared Karmele.

Forests continue to be actively cut down in Indonesia, which means there will be more wildlife animals stay in danger. We hope that rescuers will arrive in time so that more of them will be saved and protected.

10 Smallest Cats In The World!

Meet Monty, The Adorable Cat With An Unusual Face