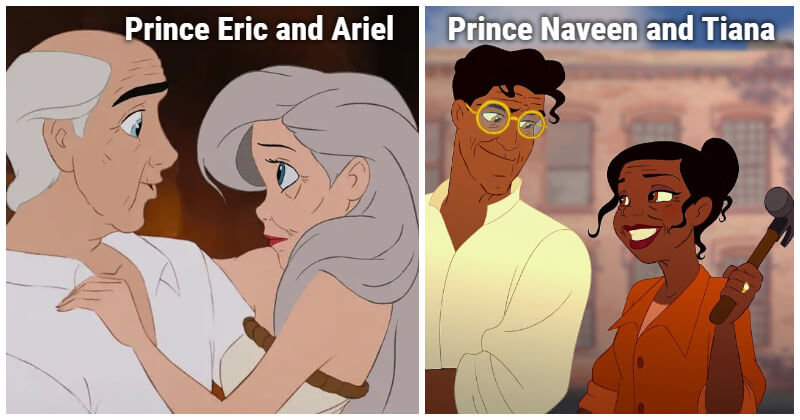 Though Disney princes and princesses are wealthy and beautiful, all will be old someday. It’s the circle of life. Have you ever wondered what will happen to these Prince-Princess couples after the endings?

Literally, they live “happily ever after” and grow old together. All couples seem to have the lives that they want. Let’s discover the main events of the second half of Disney princes, princesses’ lives, and how they look like when they are in their 50s! After working as marine biologists to save fish species on the verge of extinction, Eric and Ariel decide to travel around the world on a yacht. Sometimes, they return home to tell the experience that they have had from their journey.

#2 Belle and Prince Adam (Beauty and the Beast) Belle and Adam continue to live in the castle with Lumière, Cogsworth, and Mrs. Potts. But these loyal servants are now retired. Also, the two open a public library and lend people books for free. Aladdin has ascended the throne after the death of Princess Jasmine’s father. They happily live with the monkey Abu, the tiger Rajah and often travel on the Magic Carpet in their free time. On working days, the couple work in a charity together.

#4 Prince Naveen and Tiana (The Princess and the Frog) Tiana and Naveen have been richer by running the restaurant Tiana’s Palace. Despite receiving many offers from investors to make Tiana’s Palace a restaurant chain brand, the couple firmly refused. Years later, Tiana’s Palace became a popular tourist attraction in New Orleans. After a sweet honeymoon, Cinderella, Prince Charming, and two mice (Gus and Jaq) live on a farm in Vermont. Sometimes, they return to the castle, holds a night ball, and helps many poor girls come. After getting married, Mulan and her husband, General Li Shang, open a barracks that train young people to join the imperial army. Jane and her father decide to stay with Tarzan and his monkey friends in the jungle. To avoid hunters, they live in the deep forest. Then, Jane and Tarzan soon have a lovely son named Jack, who replaces his father to be the guardian for the whole family.