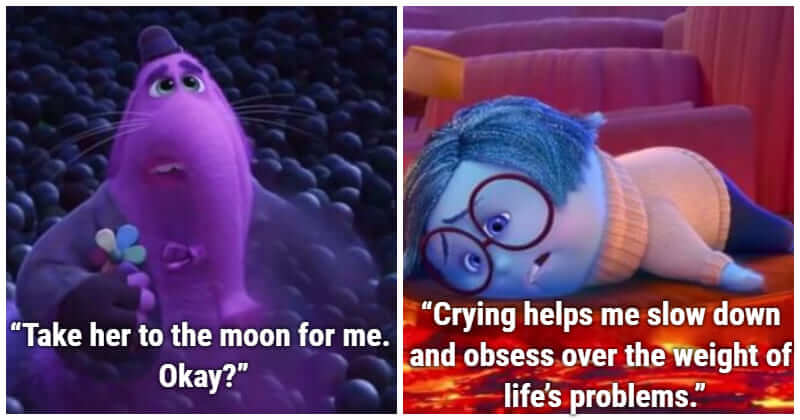 “Take her to the moon for me. Okay?” Surely you find this saying very familiar, right? This is a famous line that takes away the tears of Disney addicts by Bing Bong – a character in the movie Inside Out (2015). This is a film with a lot of costly lines that give the audience a different perspective on life. The movie tells the story of five emotions in the mind of Riley, a young girl who is seeking solutions to get through a difficult time in her life.

We may have grown up watching Beauty and the Beast, The Hunchback of Notre Dame, and Aladdin, but Inside Out forced us to reconsider and treasure everything — every memory and emotion we’ve had. It’s a film that will make you rethink all about yourself and cherish every second of your life with the people around you. Bing Bong – Riley’s imaginary best friend, is one of the film’s most heartbreaking characters. In the end, Bing Bong sacrifices his own life in order for Joy to escape the Memory Dump. His parting words in this scene have brought tears to many audiences.

#2 “Crying helps me slow down and obsess over the weight of life’s problems.” Sadness’s lines serve as a reminder that difficult as it may seem to be accepted at times, sobbing is ironically the best way to release and let all the negative feelings out on the toughest days. The TripleDent gum commercial is a recurring gag in the film. Every time the advertisement shows, the emotions react. In the midst of all the chaos, the advertisement arrives, and Anger lives up to his name by losing his temper completely.

#4 “Remember the funny movie where the dog died?” Sadness’s line means that although death is sometimes scary and hard to bear, there are ways to enjoy sadness. So just bravely face the sad things because as the film has repeatedly mentioned: sorrow is inevitable. Anger is right! There are some toppings that simply do not belong on a pizza.

#6 “Okay, caution, there is a dangerous smell, people. Hold on, what is that? That is not brightly colored or shaped like a dinosaur, hold on guys… it’s… broccoli!” Disgust is one of the most amusing characters in the film, and her utter shock and horror at the sight of broccoli are some of her most memorable scenes. The way she behaves as if it’s such a serious situation is what makes the scene work so well.

#7 “Oh no! These facts and opinions look so similar!” As recent years have demonstrated, determining the difference between fact and opinion may be quite difficult. This funny aside serves as a powerful reminder that, regardless of what anyone says, there is a distinction between the two, and it’s critical to learn to recognize it. When Riley’s Mind World grows with new islands near the end of the film, the emotions all talk about what they’ve seen, and each character has something to say about it. Fear’s remark, in which he pokes fun at the world of boy band music, is possibly the most amusing. Of course, it’s a hilarious moment, but it’s also a sobering reminder that people’s physical ability can occasionally be harmed by their emotional state. Riley is honest about her feelings, but she does so in a way that is completely understandable and respectful of her parents, and they reciprocate. Bing Bong is one of Pixar’s most famous supporting characters, and he’s known for his bright and upbeat nature. While the emotional part of his story is well-known, his catchy song is without a doubt one of the best phrases from the film.

#12 “We should lock the door and scream that curse word we know. It’s a good one!” There are times when there is no other way to expressly convey one’s rage and exasperation but to let out a curse word. Who doesn’t recall how tempting cursing was and how it seemed to make the grownups in the room so uncomfortable? “Do you ever look at someone and wonder, “What is going on inside their head?” Well, I know. Well, I know Riley’s head.” This is the movie’s opening line, in which the viewer is informed that they are about to be transported into the mind of a young girl. It’s quite fantastic, especially since Joy delivers the line. Riley and her parents are having lunch at home when she throws a tantrum, and both mom and dad’s feelings are fully expressed. It demonstrates how emotions can evolve and mature. This scene, on the other hand, is hilarious since the father displays some force, which is exactly what his wife does not want. His Anger emotion, on the other hand, is very pleased with the whole situation, as this comment delightfully illustrates. Joy and Sadness are one of the central tensions in the film, with the former ardently seeking to shield Riley from the latter. Of course, she must eventually accept the fact that, while pure sadness can be suffocating and destructive, it also gives rise to crucial emotions like empathy and compassion.