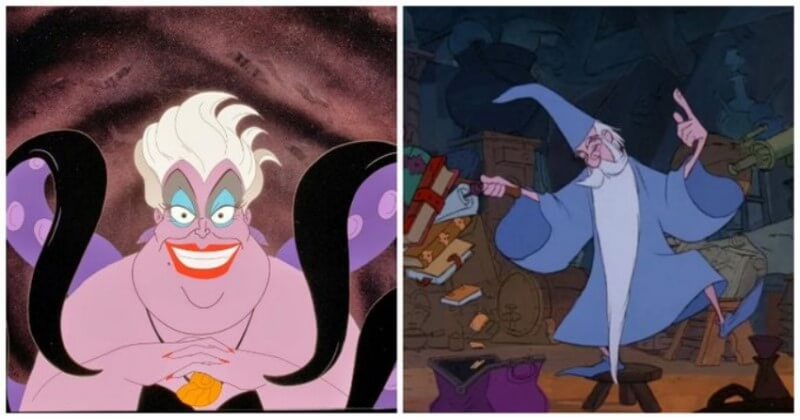 Evil disney witches, They are one of the vital characters leading the plots of the movie. ust a spell, they can totally change one life.

It cannot be a fulfilled splendent magical Disney world if there are not the existences of witches or wizards. They are one of the vital characters leading the plots of the movie. Just a spell, they can totally change or ruin one life. Therefore, along with the mysterious appearance and powerful wizardry, people are afraid of them.

Maleficent, a fictional villain in the Walt Disney animated classic Sleeping Beauty, claims herself as the “Lady of All Evil”. After being uninvited to the Royal christening of Aurora princess, Maleficent cursed her to be pierced by the needle of the threading machine before her 16th birthday and fall asleep 100 years.

#2 Merlin (The Sword in the Stone) Merlin is the most powerful wizard that tasks himself in educating Arthur. Though he is so wise, Merlin’s absent-mindedness makes his tutoring techniques are unique, turning himself and Arthur into fish during a physics lesson, for example. Undeniably, Merlin is a marvelous mentor who helps prepare Arthur for his future as a king. The Sanderson Sisters are well-known as the antagonists of the 1993 live-action Hocus Pocus movie. They are three witch sisters revived by Max Dennison by chance in Salem. They want to be immortal, so these three sisters suck the life force of children by using their life potion. Ian Lightfoot is a newly elf who is only 16 years old. He is a sweet, determined elf but usually nervous and lacks confidence because Ian lost his father at a young age. After the brothers’ adventure, Ian is now is more confident, social, and more willing to try taking risks. Ursula is a villainous sea witch in the animated movie The Little Mermaid by Walt Disney. After knowing Ariel – the youngest mermaid princess falls in love with Prince Eric – a human being, Ursula secretly offers her a temporary chance to become a human. Actually, this sea witch took advantage of Ariel to usurp her father’s position as the ruler of the oceans. Jafar is a classic villain in the Disney animated feature film Aladdin (1992). He was presented as the king Sultan’s most trusted and loyal advisor at first. In fact, he wants to control cosmic power, which he would use to take the kingdom and even the whole world and secretly do anything for his ambition.

#7 Dr. Facilier (The Princess and the Frog) Dr. Facilier (Shadow Man), the main character of The Princess and the Frog movie, is also one of the most famous antagonists of Disney. Because of coming from a poor background, Facilier always resents and envies the rich and prosperous. With help from “dark power”, this cruel, smooth-talking doctor witch wants to rule New Orleans. In return, he has to provide the souls of New Orleans’ denizens to his “benefactor”.

#8 Rumpelstiltskin (Once Upon a Time) Rumpelstiltskin, also known as Mr. Gold and Weaver, is the most powerful magician. Although Rumpelstiltskin argues that his deals are fair, his deceptive deals always make his clients feel regret.

The End Of Ye: Kanye West Dropped By All His Business Partnerships