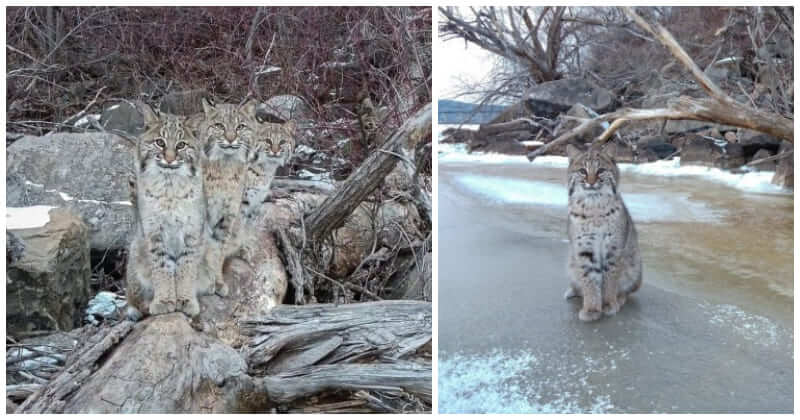 Ask any photographer and they’ll tell you why it’s so hard to take a perfect picture, especially when it comes to nature. A flawless photo is a combination of varying factors such as skill, intuition, good timing, tools, and creativity. Once they are taken together, they all end up in what people call ‘masterpieces’ – which happen once in a while, just like the photos of Mike Mayou.

Photographer Mike, born in Duluth, has started taking photos from a young age. He always has a passion for photography and videography of adventure, landscape, concerts, portraits, and engagements. In a work trip along the St.Louis River, he was able to capture once-in-a-lifetime shots of three bobcats in the wilds.

The discovery of the wild animals came by chance when Mike was flying his drone to the river. The lynxes looked beautiful and calm, but it seemed to be their first time approaching the drone. They wondered what was the flying object that had suddenly landed in front of them. While looking for the answer, the bobcats could get used to the strange object and its buzzing as well.

“These cats were very comfortable being up close and personal with the camera,” said Mayou. “It’s quite rare for humans to see bobcats in the wild, but the drone allowed me to interact with these animals in a unique way.”

The man was able to take several shots of the three lynxes, who, sat and stood still, and even ‘came into a pose’ together on a fallen log.

Enjoy some photographs of the bobcats here: To avoid disturbing the animals, Mayou left the river after he had finished with the pictures. He refused to tell the exact location of the lynxes because photographers might come and swarm the animals.

“As we all know, drones can potentially scare animals, especially if the drones are larger in size and get close to the creatures,” the photographer says. “After looking into the ethics of drone photography around wildlife, I realized I may have gotten too close to the bobcats for comfort, and looking back, I would not have gotten as close as I did. If the behavior of the animal changes, the drone is too close.”

Watch the adorable footage when Mike spotted and captured the bobcats here:

5 Amazing Animals With Their Habitat That Is The Coral Reef

30 Awesome Responses To The ‘Didn’t Want A Dog’ Challenge

Baby Gorilla Has Unique Patch of Pigment on Her Finger, Making It Look Human-Like