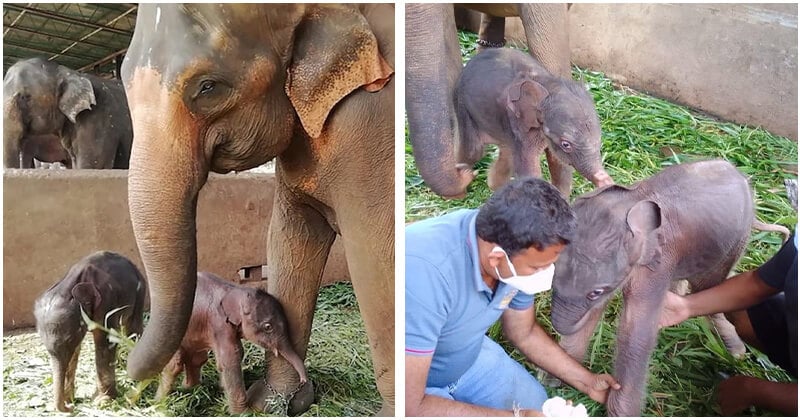 The last day of August was an extremely happy day for Pinnawala Elephant Orphanage as one of its female elephants, Surangi, successfully gave birth to two adorable calves. Elephant expert Jayantha Jayewardene has claimed that they are the very first twins born to a domesticated elephant in Sri Lanka since 1941, so it’s is absolutely big news for this country as well. Both of the babies are male and according to the orphanage’s head Renuka Bandaranaike, the newborns look a little smaller compared to other elephant calves, but there are definitely healthy.

“Both the calves and the mother are doing fine,” she said. “The babies are relatively small, but they are healthy.”

Let’s take a look at the cute duo in the short clip right here:

It’s not the first time the 25-year-old becomes a mother, but Surangi is still truly excited about her new role. She had her first child 12 years ago and it was also a male calf.

Pinnawala Elephant Orphanage was founded in 1975 and after 26 years of looking after wild elephants in need, it now has the largest herd of captive elephants in the world. Surangi’s 17-year-old partner, Pandu is also one of the 93 inhabitants living under the care of the staff there. Last year, wildlife officials in Sri Lanka also noticed a pair of twin elephants wandering around at the Minneriya sanctuary in North Central province. They were the very first twins that Sri Lankans ever spotted in the wild.

Elephants are considered sacred creatures in this country, but that’s sadly one of the reasons why they are being mistreated. Many wealthy people are illegally keeping them as pets and more and more abuse cases have been recorded in recent years. In addition, activists have claimed that at least 40 elephant calves have been stolen from wildlife parks in the past 15 years.

Thankfully, the government has unveiled tough regulations to protect these friendly, gentle animals.

According to researchers, Sri Lanka is home to about 200 domesticated elephants and an estimated 7,500 in the wild.

Please share this great news with your loved ones!