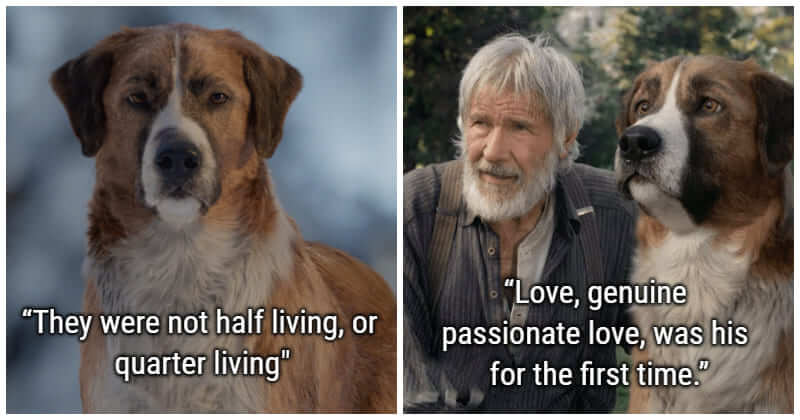 “The Call of the Wild” released in 2020  is an American adventure film that is based on Jack London’s 1903 novel of the same name. Chris Sanders directs his first live-action picture without a co-director. As a live-action/animated hybrid, “The Call of the Wild” utilizes cutting-edge visual effects and animation technology to create totally photorealistic—and emotionally authentic—characters for the animals in the film.

Critics gave it mixed reviews, praising Ford’s acting and the “entertaining action and serious tone” but criticizing the “uncanny” CGI of the creatures. If you have ever read Jack London’s story, you will surely love the movie and wonder if the emotional developments of Buck – the main character in the movie are similar to the story or not. Now, we’ll look at meaningful sayings that are strongly influenced by Buck’s eyes in the Disney movie “Call Of The Wild”

#1 “Love, genuine passionate love, was his for the first time.” #2 “They were not half living, or quarter living. They were simply so many bags of bones in which sparks of life fluttered faintly.”

#3 “For the pride of trace and trail was his and sick unto death, he could not bear that another dog should do his work.” #4 “Kill or be killed, eat or be eaten, was the law; and this mandate, down out of the depths of Time, he obeyed.”

#5 “Here was neither peace, nor rest, nor a moment’s safety. All was confusion and action, and every moment life and limb were in peril.”

#6 “The ghostly winter silence had given way to the great spring murmur of awakening life.”

#7 “He was sounding the deeps of his nature, and of the parts of his nature that were deeper than he, going back into the womb of Time.”

#8 “It was heartbreaking, only Buck’s heart was unbreakable.” #9 “He had been suddenly jerked from the heart of civilization and flung into the heart of things primordial.”

#10 “He had killed man, the noblest game of all, and he had killed in the face of the law of club and fang.”